How does Metro preserve fossils found during excavation? 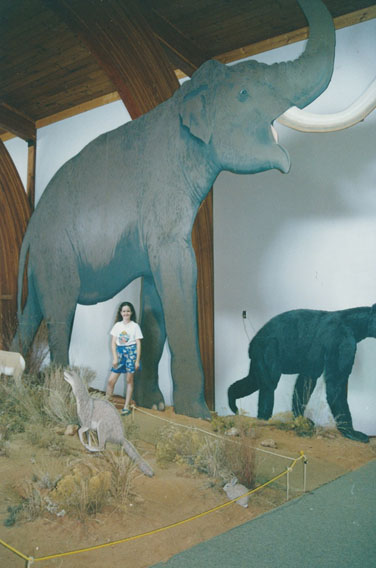 Since she was seven years old, Ashley Leger has loved elephants—particularly ones dead for thousands of years. So when she learned that a mammoth or mastodon was discovered under Wilshire Blvd., it was better than Christmas.

“My academic career is all about studying elephants and how to preserve their fossils,” explained Leger, who earned her Ph.D. in Paleontology in May 2016 from the South Dakota School of Mines and Technology.

Her interest in mammoths began when her parents took her to The Mammoth Site, a museum and paleontological treasure in Hot Springs, South Dakota, in the state’s famous Black Hills. At this former sinkhole, paleontologists have found 61 mammoths, the most found in a single location.

“The place absolutely captivated me: the science behind it, the animals,” Dr. Leger recalled. “I remember the mammoth footprints painted in yellow. I jumped from one footprint to the other, telling my Mom that this is what I want to be.”

And so she left behind her dreams of becoming a veterinarian or the Red Power Ranger.

Ashley works for Cogstone Resource Management Inc.  Metro hired Cogstone paleontologists to monitor excavation work at the three Purple Line Extension stations and help identify and preserve fossils found during construction. Cogstone was on duty as early as 2013. At that time, an exploratory shaft was dug opposite the Los Angeles County Museum of Art.

Dug to approximately 75 feet, the exploratory shaft was designed to

Dr. Leger supervises the Cogstone paleontologists. That is why she received a call from one of her staff on November 23 informing her that a three-foot section of tusk and mastodon tooth fragments was found 15 feet below the surface.

“It was unreal for me,” she said with a huge smile. “I wanted to study proboscideans [elephants and their distant ancestors] my entire life. I knew it was possible to find a mammoth or a mastodon. And then in, four days we found two!” 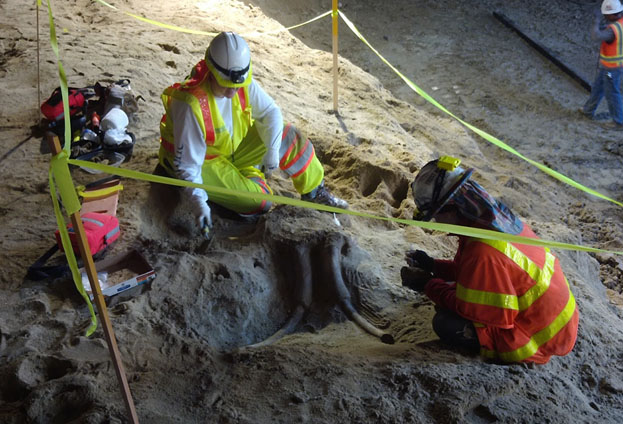 On Monday, November 28, 2016 came the second surprise. “I received a call from my onsite monitor saying there was another find,” she remembered. “I went down early the next day.  I saw the specimen at 6 am, knew it was a skull, and spent that day excavating.” Lost in her work—excavating with delicate tools such as dental picks, spoons and paint brushes—Ashley didn’t notice that 15 hours had passed.

By that time, the skull was jacketed in plaster for safe removal and work could continue. “We were very lucky to find a skull,” Ashley said. “You often don’t find the head right off the bat.” She hopes a similar discovery awaits her team during excavation at the Fairfax and La Cienega stations.

The fossils were tenderly moved offsite for further analysis. Once that is done, the fossils belong to the Natural History Museum of Los Angeles County. Where a Purple Line Extension fossil finally resides depends on what material surrounds the fossil. For example, if the tusks had been found surrounded by asphalt, they would have been sent to the La Brea Tar Pits and Museum.

Quick to insist that she has the best job in the world, Ashley describes herself as “the kid who never grew up,” eager to play in dirt each day. Yet she has an academic’s perspective on the importance of the discoveries.

“When we are working with those fossils, we are likely the first humans to ever see them,” she explained. “And although these animals were once alive, they haven’t see sunlight in thousands of years.”

“It’s my job to preserve the history of the past,” she added. “Not just what’s happening today or tomorrow, but what happened a long time before we were here. 10,000 years is very short to me. I work on a time scale different from most human beings. When we get into the millions, then it’s more on my time scale.”

She takes special satisfaction that the mastodon or mammoth skull (the difference is the shape of each species teeth) is out of harm’s way and will be preserved in a museum. “California is one of the few states that protects this sort of discovery. If they had found this skull in South Dakota, they likely would have bulldozed through it to continue the work.”