Status of the Study 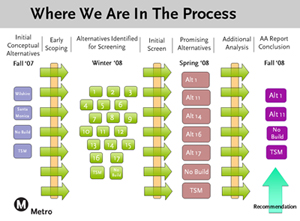 The Alternatives Analysis (AA), the first phase of Metro’s WestsideExtension Transit Corridor Study, concludes in January 2009 when staff presents the study recommendations to the Metro Board of Directors for approval. At that time, staff will also request authorization to proceed with the next required step, preparation of a Draft Environmental ImpactStudy/Report (DEIS/DEIR). This caps the 18-month study which included preliminary technical evaluation and analysis, and an intensive community involvement process. The purpose of this effort was to identify the most promising alternative(s) for improving transit in the 38 square mile study area that encompasses portions of the Cities of Los Angeles, West Hollywood, Beverly Hills and Santa Monica.

The AA Study evaluated a wide range of mode and alignment alternatives before identifying two options that will be presented to the Metro Board in January 2009 for approval to move into a DEIR/DEIS. Both are Heavy Rail Transit (HRT) options which are recommended because of their performance on measures such as their capacity to meet travel demand, new ridership, travel time savings, and cost effectiveness. They also serve higher-density areas, minimize traffic and environmental impacts, and fit within the dense, urban Westside area. Alternative #1 extends west along Wilshire Boulevard from Western Avenue into Beverly Hills, Century City, Westwood and Santa Monica. Alternative #11 incorporates all of the Alternative and adds a segment from Hollywood/Highland, through West Hollywood along Santa Monica Boulevard, by the Beverly Center area, rejoining the Wilshire alignment in Beverly Hills. 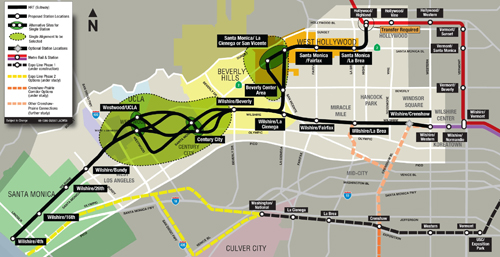 Beginning with early scoping in fall 2007, a set of 19 preliminary alternatives was identified for consideration, including a No-Build and a Transportation Systems Management (TSM) alternative. The remaining 17 alternatives were developed as “build alternatives” that included various transit modes, alignments, and potential station locations. Based on technical analysis and public feedback, it was determined that HRT or subway, the same technology as the Metro Red and Purple Lines, is the most practical transit mode for operation within the Westside Extension Transit Corridor. The opportunity for above-ground or aerial alternatives was eliminated during the course of the AA based largely on high levels of existing congestion and narrow rights-of-way. Alternate modes – such as light-rail, monorail and bus rapid transit (BRT) were eliminated because of their inability to meet the travel demand in this corridor. Several alignments were evaluated during the study, including variations on a Wilshire Boulevard alignment, Santa Monica Boulevard alignments and combinations of both.

The public was invited to provide input at key study milestones so that Metro heard from and incorporated community feedback every step of the way.  Over 1,200 people attended five rounds of scoping and community meetings during the AA, and more than 900 comments were received verbally, in writing and electronically.  In addition, targeted stakeholder meetings were held to address specialized issues and localized concerns.  Multi-lingual outreach was conducted in the diverse project study area in English, Korean, Russian and Spanish. To keep stakeholders engaged on an ongoing basis, Metro also maintained a study website at www.metro.net/westside and initiated the Metro Westside Extension group on the Facebook social networking site.  Facebook group membership is now approaching 1,300 as study stakeholders share information and dialogue about their vision for the study.

In November 2008, Los Angeles County voters passed Measure R, approving a half-cent sales tax increase in Los Angeles County to fund transportation projects and programs.  It is estimated that this will generate $30-$40 billion over 30 years.  Measure R could provide $4.1 billion in local funding towards building the Metro Westside Extension subway.  The two recommended alternatives are currently estimated to cost $6.1 - $9 billion for construction only (in 2008 dollars).  Depending on the final recommended project, it is likely that funding would come from a variety of sources, including the federal government.

In January 2009, the Metro Board of Directors will consider the recommendations in the AA Study and decide whether to authorize a full environmental review and engineering study.  The focus of the next phase, the Draft Environmental Impact Study/Environmental Impact Report (DEIR/DEIR), will be to further analyze the alternatives and develop greater specificity about aspects of the project.  This will include refining projected costs and ridership in order to be competitive for Federal Transit Administration funding

For additional information or questions, to sign-up for study updates or for copies of materials presented at all of the meetings held during the Alternatives Analysis, please visit www.metro.net/westside or contact the project information line at 213.922.6934.  You can also find us on Facebook at "Metro Westside Extension."