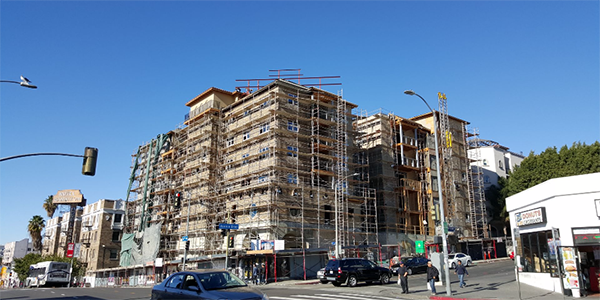 The basic structure of the TOD Housing Program borrows heavily from two existing State housing programs. For rental development, it is patterned after the Multifamily Housing Program (MHP), but without the emphasis on large family units or special needs populations. For homeownership development, the model is the Building Equity and Growth in Neighborhoods Program (BEGIN), absent the requirement for local regulatory relief.

Eligible developments are those with greater than 50 units, located within 0.25 miles of a qualifying transit station, have at least 15% of units be restricted, and meet minimum density requirements.

The Paseo at Californian

The TOD Housing Program was used to provide gap funding for The Paseo at Californian. The Paseo is a 53-unit affordable housing project located at the corner of 6th and Bonnie Brae Streets in Los Angeles’s Westlake neighborhood. The project was developed by American Communities and all units in the building will be income restricted. The TOD Housing Program provided a total of $6.4 million in loans to the developer. The project will offer critically needed low-income housing in a transit-accessible, downtown-adjacent neighborhood.

The site and Westlake more generally are well-served by transit. The site is a short walk from the Westlake/MacArthur Park Metro station which serves the Red and Purple lines. The lines provide easy access to Downtown, Koreatown, Hollywood, and other areas of Los Angeles’s urban core. Furthermore, several major bus lines service Wilshire Boulevard including the 720 Metro Rapid line.