Overlay zoning is a regulatory tool whereby a special zoning district is created and placed over an existing base zone(s). The overlay zone identifies special provisions in addition to (or instead of) those in the underlying base zone. The overlay district can share common boundaries with the base zone or fall across several base zone boundaries. Regulations or incentives are attached to the overlay district to encourage particular types of development within a special area – such as within a radius of an existing or planned transit station or along a transit corridor. The overlay can allow for different uses, higher development intensity, and modified standards, sometimes combined with various bonuses and incentives. Overlay zones can also be used to stimulate new development by reducing development requirements (such as parking standards, setbacks, etc.) to support new construction near transit. There are three basic steps to creating an overlay district: 1) defining the district’s purpose, 2) identifying the geographic area, and 3) establishing specific rules for the district. 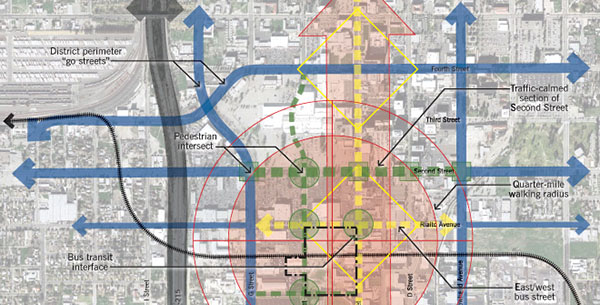 The advantage of an overlay zone is that adoption can typically be accomplished more easily than a Specific Plan or comprehensive zoning update, which results in cost or time savings. In general, overlay zones have the potential to be very effective tools for promoting transit-supporting development near stations or stops. Since the standards are tailored to development needs of specific districts, they can help communities evolve towards an envisioned urban form or address specific inequities/undesirable land uses.

In order to facilitate new projects being built near existing and potential future transit nodes, the City of West Hollywood established an overlay zone in the General Plan Land Use Element. This Transit Overlay Zone applies to parcels along commercial boulevards and adjacent multi-family zoned parcels within 1/3 mile of major bus transfer points. This special zoning allows for modifications to the development standards to encourage mixed-use development (and other transportation-related improvements). The West Hollywood TOZ is different in that it offers incentives for building in transit areas that are not related to the intensity or height of a project; rather, projects can get exemptions or changes on less visible but often just as critical zoning requirements such as setbacks, stepbacks, lot coverages, parking requirements, open space requirements, etc. The incentives granted are subject to planning department and design review discussion, fostering a highly flexible set of standards.

Specifically, individual development projects in a Transit Overlay Zone may be allowed modifications to development standards, excluding height and density, for providing certain amenities in addition to any required TDM measures, including one or more of the following: contribution to City transit programs; pedestrian improvements as appropriate; on-site shuttle program for seniors and persons with disabilities, group trips, subway shuttle, or other purposes; accommodating bus stops or taxi stands on-site; bicycle facilities; or other improvements that meet the intent of this policy.

To encourage transit usage and to generate a safe and pleasant pedestrian-oriented environment, the City of Pasadena developed an overlay that applies to new development projects located within 1,320 feet (1/4 mile) of a light-rail station platform. The TOD overlay zone specifies standards and requirements for the following:

In planning for the completion of the sbX E Street Corridor Bus Rapid Transit Project (sbX BRT), the City of San Bernardino prepared a Transit Overlay District (TD) that would allow and encourage an appropriate mix and intensity of land uses in a compact pattern around stations in order to foster transit usage, create new opportunities for economic growth, and encourage infill/redevelopment. The existing General Plan Land Use and Zoning designations are maintained for all affected parcels – the TD District is a true ‘overlay’ zone which further defines development standards specifically for the station areas. The guiding principles for the districts included:

A table (on page 49 in the Plan) is included to clarify the key differences between existing zoning and the overlay zone: 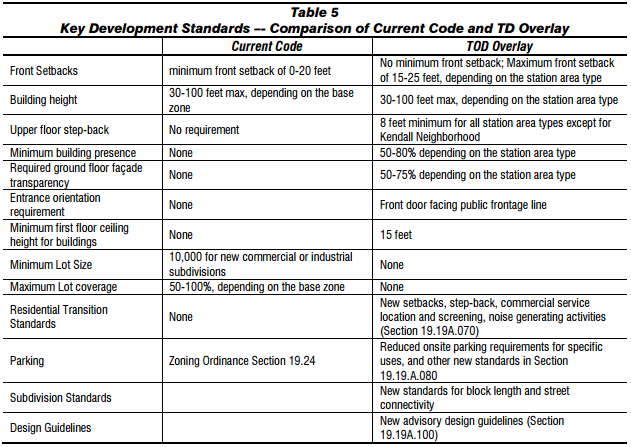 The City of Artesia is in the process of adopting a very simple overlay zone with the stated goal of enabling and encouraging mixed-use development (residential over commercial retail) in the city center. While this zone was not expressly created to support transit (the City does not currently have any rail transit), a mix of uses is highly supportive of public transportation and TODs in general, and as such, could be applicable to similar contexts. The allowed uses in the overlay zone are the same as the uses allowed in the underlying zone – with the addition of condominiums, live/work units, and other affordable housing units.

To meet the goals of downtown revitalization, the overlay zone allows for a maximum 2.5 FAR, 45 dwellings units per acre, and seven stories. Providing this additional development capacity should stimulate new investment in the City’s central core. The adoption ordinance also includes a variety of standards and requirements to ensure good planning principles and architecture are used in mixed-use developments.