The New Markets Tax Credit Program (NMTC) encourages private investment in historically low-income communities experiencing a lack of investment. The program aims to break a cycle of disinvestment that often reinforces the lack of economic opportunity in low-income areas. The program has been used to support investment in a range of geographic settings including transit-adjacent distressed communities. 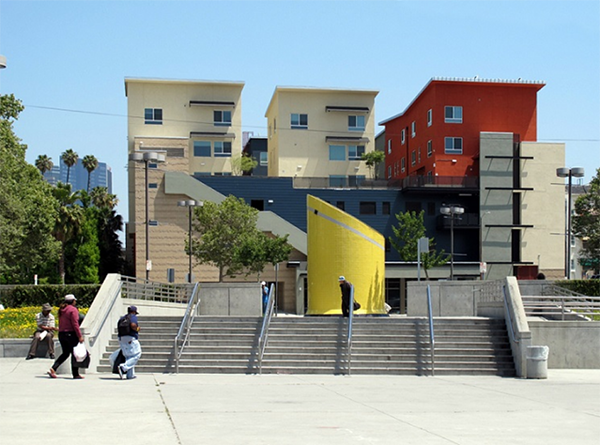 The program has been successful in financing a range of businesses in low-income communities. The program has supported manufacturing, food, retail, housing, health, technology, energy, education, and childcare establishments. In total, since 2003, the program has been instrumental in supporting nearly 200,000 jobs and the development of approximately 160 million square feet of commercial space. Estimates of the program’s impact indicate that the tax credits have a strong multiplier effect: $8 of private investment is generated for every $1 of federal government support.

Eligible investments must comply with regulations outlined in Section 45D of the Internal Revenue Code. These regulations stipulate limits on CDE activities, eligible locations for NMTC investment, qualifying businesses, and other investment requirements.

While the NMTC program is not exclusively limited to TOD neighborhoods, TOD sites in low-income neighborhoods can benefit from the tax credits as supplementary financing for needed development. In low-income areas, including those served by transit, traditional financing is often insufficient to support desired development. NMTCs can improve project feasibility by partially closing the financing gap.

MacArthur Park Transit-Oriented Development is a mixed-use development adjacent to Metro’s MacArthur/Westlake station. The project was formed from a public-private-community partnership with the goal of providing affordable housing in a livable, walkable community with easy accessibility to jobs and services. The landmark project is a catalyst for broader revitalization in the MacArthur Park community.

Developed by a national affordable housing developer, McCormack Baron Salazar, the project was built in partnership with an array of local and state agencies. New Market Tax Credits played an important role in funding the project. The project consists of 90 affordable apartments and 15,000 square feet of retail in the first phase. The second phase will include 82 affordable units and an additional 15,000 square feet of retail.

NMTCs were used to support the construction of a new YMCA health and fitness center in the Koreatown neighborhood of Los Angeles. The project site is located at the intersection of 3 rd Street and Oxford Ave, approximately one-half mile from the Wilshire/Western Metro station and bus stops serving several key Metro routes. The 29,000 square feet facility serves the diverse surrounding community. Residents of the project’s census tract are 30% Hispanic, 20% African American, and 5% Asian. The project will promote healthy lifestyles in a community burdened with a 42% youth obesity rate. The L.E.E.D. Silver facility will serve over 30,000 families annually.

Project funding was secured through two CDE’s: Lowe CDE, associated with Lowe Enterprises, and The Los Angeles Development Fund CDE. The total NMTC eligible investment was $28.3 million. Beyond providing a new community facility for the neighborhood, the project will benefit the surrounding area through the creation of 100 permanent jobs.