The purpose of establishing minimum densities in zoning is to ensure that a sufficient level of development occurs to support transit use, walkability, local retail or other goals. Local or regional jurisdictions set an intensity target for an identified area, and developers are then required to meet the target. Establishing a baseline or minimum unit density or floor area ratio (FAR) and eliminating maximum densities allows developers to determine the appropriate building size, unit mix, and other design features to reach the target. These standards can be in a zoning code, overlay zone, or more often a Specific Plan. 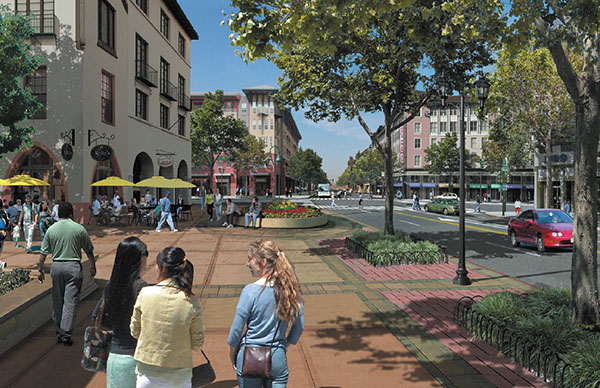 The difference between traditional zoning and zoning with minimum densities is that the latter ensures that a clustering of activities, residents, and economic generation will occur over time within the designated area. In the case of transit, minimum development standards help advance the goal of developing a functional and economically successful transit district by creating a substantial population of residents and employees in proximity to the transit facilities. Minimum densities support transit investments, enable neighborhood retail, expand housing choices, protect open space, and reduce greenhouse gas emissions. 1

This combination of the flexibility to determine the specifics of individual projects and the certainty about the characteristics of the overall area is often attractive to both cities and property owners. It also has the advantage of offering relative assurance about the number of transit riders, giving the transit agency and real estate investors added security about the future economic value of the station and surrounding projects.

The Warm Springs/South Fremont Community Plan in the City of Fremont is a comprehensive, long-term planning document for the WSI district , intended to facilitate the creation of a vibrant, urban, mixed-use district in the vicinity of the new Warm Springs/South Fremont BART station. The goal of the plan is to provide a thriving employment center focused on innovation and advanced manufacturing while incorporating urban housing, retail, parks and plazas, and complementary uses such as schools , business and conference centers, entertainment and cultural art venues, and an art program.

The plan establishes required minimum density and FAR targets for future development around BART station. When at least 50 percent of a building’s site area lies within a one-quarter- or one-half-mile radius of the BART station, the project must meet the standards set forth in Table 18.49.070 for the area within the radius:

The district plan not only states a minimum density, it also lays out requirements for minimum streetwall percentage, the minimum depth of occupied habitable space, ground floor articulation, minimum open space, and other details relating to massing and bulk. 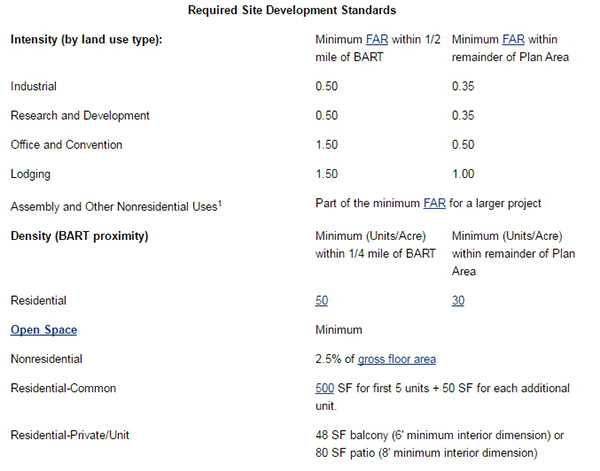 In anticipation of new bus rapid transit and to promote revitalization of underutilized land, the City of San Leandro established land use designations for the parcels near existing and planned transit. These designations vary according to their distance from the station, existing land use adjacencies, and current building types. The highest intensity residential designation is the TOD-BART Area Mixed-Use, for areas that have immediate adjacency to the BART station. To maximize the transit ridership potential of these residential land uses, the City requires a minimum density for new projects of 80 units per acre. This density baseline creates a general expectation for developers in terms of the construction/building type and the level of private investment needed. In this area, the City also allows unlimited residential density and heights. The precise standards are as follows:

In addition to the zones mentioned above, the TOD Strategy also includes “special policy areas,” where some flexibility in the ultimate development program is allowed, but particular stipulations are also added. These range from the location of a public plaza, a setback for a future bus loading area, street closures, minimum building heights, or allowing office uses above ground floors. 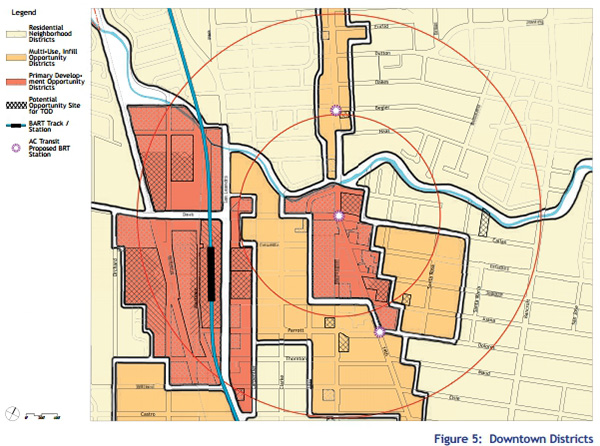 With the intent to maximize development potential near transit stations, activate sidewalks, and create opportunities for residential and commercial development, the City of Seattle established a minimum density ordinance in October 2014. The ordinance establishes a permanent minimum floor area ratio (FAR) requirement for lots with a pedestrian designation in Urban Villages, Urban Centers, and Station Area Overlay Districts. Minimum FAR for the designated areas has been set according to the table below in Section 23.47A.013 of the Seattle Municipal Code.

The minimum density ordinance supports the goals of Seattle’s Comprehensive Plan to foster vibrant and pedestrian-oriented neighborhood centers. Furthermore, the urban village strategy within the Plan calls for more growth to existing urban centers, which can be more easily achieved with minimum density standards in key urban areas.