To encourage private developers to design and build transit-supportive projects, jurisdictions can provide incentives and/or bonuses to projects that a) are located in transit zones, and/or b) provide benefits to the community, such as affordable housing or open space. In particular, affordable housing is highly desired around transit, since studies have shown that low-income populations benefit the most from transit access and use it at greater rates than the general population. However, the State of California already has a law that provides an adjustable density bonus in exchange for including affordable housing units in new construction, so many communities have elected not to include additional local bonuses on top of this existing provision.

Affordable housing is highly desired around transit, since studies have shown that low-income populations benefit the most from transit access and use it at greater rates than the general population. 2 State of California law provides an adjustable density bonus in exchange for including affordable housing units in new construction, and local agencies may build upon and augment these incentives if they so choose.

Typically, a new development would receive 10% to 33% bonus in dwelling units per acre, or 0.25 to 1.0 additional FAR for non-residential development (based on existing bonus provisions in several Los Angeles cities). Other incentives might include bonus height, reduction in the parking requirements, flexibility in development regulations , fee waivers or reductions , and permitting priority .

Density bonuses can be used to encourage and increase the financial viability of: 1) mixed use development (residential over commercial); 2) building on vacant or underutilized parcels or non-conforming uses; 3) projects that provide a high percentage of deed-restricted affordable housing units; and 4) projects that include public benefits such as public open spaces, plazas, new pedestrian ways, or improved connections to transit stations. This tool can be applied as a General Plan policy, a zoning code or a stand-alone ordinance. The incentives can either be discretionary (subject to a director or commission review) or by-right(available if the requirements are met).

This County ordinance establishes a number of geographic areas as transit-oriented districts where the special incentives will apply (approximately one-quarter to one-half mile radius around the station). To achieve the goals of increased transit ridership, reduced traffic congestion, and improved air quality, “unique development standards and case processing procedures” will be in effect in these transit-oriented districts.

The specific height and density incentives in the ordinance are:

In the event that a project qualifies for more than one category of density bonuses, the total combined density bonus granted shall not exceed 50 percent. While the ordinance does establish several incentives that are not available to projects outside the transit district, there are also greater requirements on these developments, such as:

The Green Line Ordinance also offers parking reductions (pg 29); within a transit-oriented district, reductions of up 40% are offered for multi-family residential projects. Reductions of up to 60% can be granted for certain neighborhood retail and community-oriented uses.

In order to offer increased density as an enticement to developers, the City of Baldwin Park took a slightly different tack than other cities. Instead of a flat percentage increase – which could potentially allow already large developments to become so massive or dense that they are dramatically out of scale with their surroundings – the Downtown TOD Specific Plan includes a simple allowance for five additional units for each 1,000 sf of open space. By tying greater on-site open space to increases in density, this provision attempts to discourage developers from simply “maxing out” their project site; rather, to fully take advantage of the bonus, developers must design buildings that maximize courtyards and other interior green spaces, creating more attractive residential properties. The Plan language is as follows: 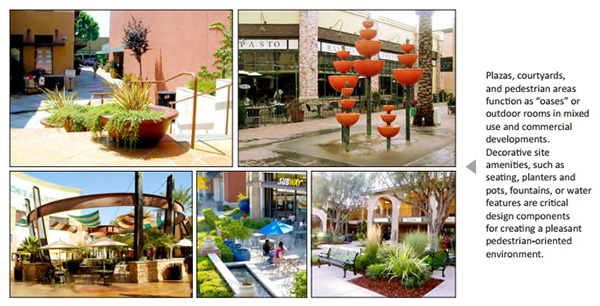 Bonus units are also available for the provision of public art (if it exceeds a certain valuation and meets accessibility/visibility standards).

Culver City’s incentive program is city-wide, focused on mixed-use zoning, and based on an innovative calculation related to the economic valuation of new unit market values. For mixed-use projects, it provides for an increase from 35 units per acre to 50 du/a (a 40% increase). The public benefits that trigger the bonus allowance are streetscaping improvements, public parking (in excess of that required by code), pocket parks and open space (minimum 5,000 sf), green construction, and other benefits as approved by Council. These community benefits must be incorporated on-site for the life of the project, unless they are part of an off-site public improvement, whereupon the developer provides an in-lieu fee contribution.

The manner in which the required quantity of developer contribution towards public benefits is calculated is unusual – it is based upon the additional profit derived from the additional dwelling units allowed by the density increase. Specifically, the City uses the number of additional units multiplied by 15% of the market value of each unit. The value of the additional units is estimated and agreed upon the city and developer, and 50% of the value enhancement is dedicated towards community benefits. Creating a clear link between developer profit and improvements in the community is a concrete way to illustrate that giving special bonuses to a project will result in direct improvements in local quality of life.

The South Gate General Plan contains a specific list of the public amenities, improvements, and community benefits that can earn increased densities for projects that provide beyond those required by code. These bonuses vary by the land use designation, as shown in the plan:

P.1: The City will provide a density bonus for residential and nonresidential projects where public improvements are made in excess of those required by code. The density bonuses will be as follows:

P.2: Public improvements that qualify for the density bonus will include, but not be limited to:

Downtown Burbank has the potential to become a major transit-oriented destination. The current use mix is one which prioritizes employment (rather than housing), and the TOD Plan acknowledges this typology. Since there is already an economic engine in downtown, the Plan emphasizes improved access to transit, as well as supporting mixed land uses within one-quarter mile of the intermodal transit center. To encourage intensification of current land use and new walkable connections to transit, the Plan allows for several specific bonuses: 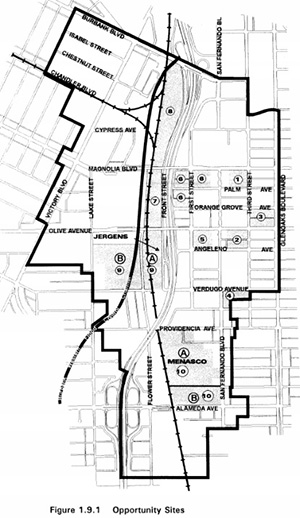 The Density Bonus Law (found in California Government Code Sections 65915 – 65918) provides cities and developers with powerful tools to encourage the development of affordable and senior housing, including up to a 35% increase in project densities, depending on the amount of affordable housing provided (there is a sliding scale that varies by the affordability level of the units). The Density Bonus Law is about more than the density bonus itself, however; it is actually a larger package of incentives intended to help make the development of affordable and senior housing economically feasible. Other tools include reduced parking requirements, other incentives and concessions such as reduced setback and minimum square footage requirements, and the ability to donate land for the development of affordable housing to earn a density bonus. Often these other tools are even more helpful to project economics than the density bonus itself, particularly the special parking benefits.

The most important thing to note about the law is that the Density Bonus is a state mandate, and this a developer who meets the requirements of the state law is entitled to receive the density, regardless of the wishes of the local jurisdiction. This conflict has caused tension in certain communities, but the law has undoubtedly resulted in the construction of more affordable units overall. Specific bonuses are shown below in the table, and cities must be aware of this legislation when planning for transit-supportive places and communities. 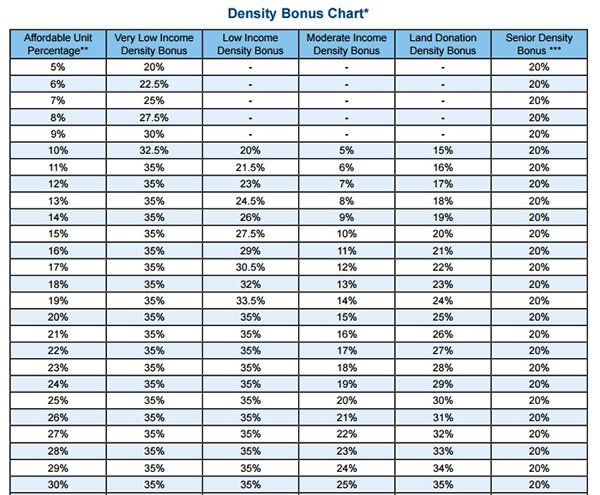