Building off the General Plan vision statements and land use designations, which identify development standards for a community’s transit districts, the goals and policies in the General Plan establish city-wide and area-specific policies. These policies are instrumental in guiding land use in critical districts, such as around transit. Jurisdictions will typically review the General Plan every ten to fifteen years and identify the need for revisions to policies to reflect current needs and conditions. Since General Plan update cycles and transit planning efforts both have long lifecycles, it is critical to look ahead at anticipated public transportation alignments, and prepare strategies, policies, and implementation actions for future stations long before they are built. General Plan goals and policies in the Land Use, Transportation, and Housing Elements can be used to provide a framework for all aspects of transit-supportive places, including:

Often the most critical contribution that a General Plan can have for transit-supportive places is to establish clear implementation actions, programs, and physical improvements for the station area(s). Creating this explicit link is key for translating goals and a vision into concrete action. Most commonly, related policies and actions are found in the Land Use, Circulation/Mobility, or Housing chapters. Typically these could include policies and programs such as establishing a new Specific Plan, establishing a Parking District or Business Improvement District, securing agreements with transit agencies, recommending a nexus impact fee study (impact fees are a commonly used method of collecting a proportional share of funds from new development for infrastructure improvements and other public facilities to offset the impact of new residents), prioritizing key streetscape or infrastructure projects, or other similar steps.

Arranging for the appropriate policies can also help accelerate and simplify the development process through the new CEQA exceptions provided by SB 743 which states that projects that are consistent with “with the general use designation, density, building intensity, and applicable policies specified for the project area” can avoid studying the traffic, parking, and aesthetics impacts of new development.

During the City’s General Plan update process, citizens and the City Council identified key community design concepts which will serve as the foundation for future land use decisions, and for the related goals, policies, and actions. In particular, the City’s General Plan helped to set the stage for multiple transit-supportive places by emphasizing focused development and the ‘transit village’ concept through two specific development policies:

The language and intent in these community design strategies later led directly to the creation of zoning code amendments that have facilitated new mixed-use, transit-supportive development: a Transit Villagezone, and a Corridor Transition overlay zone. The General Plan also included a map of the corridors where focused activity was to occur.

Supportive actions in the South Gate General Plan that include:

The policies in the General Plan flow from guiding principles which stress that Pasadena will be a city where people can circulate without cars, that higher density development will be directed away from residential neighborhoods and into Transit Villages, and that Pasadena will be economically vital city by providing jobs, services, revenues, and opportunities. The most relevant goal is #29:

GOAL 29. Transit Villages. Moderate- to high-density mixed-use clusters of residential and commercial uses developed in an integrated “village-like” environment with buildings clustered on common plazas and open spaces in proximity to Metro Gold Line stations capitalizing on their induced market demands and land values, facilitating ridership, and reducing automobile use while increasing walkability.

The Plan also contains several other policies related to transit-oriented development, pedestrian orientation, infrastructure improvements, and parking policy. The key concepts are intensification of activity and development near transit, a recognition that different stations should respond differently to the surrounding context, and addressing the issues around parking supply/demand:

The City’s General Plan includes a variety of policies aimed at encouraging the provision of and use of alternative modes of transit, emphasizing pedestrians over cars in portions of the city, while still maintaining the character of South Pasadena’s commercial areas. Examples include:

The Santa Monica LUCE highlights two principal locations for mixed-use development around transit, and expands upon the desired vision and character of these focus areas with accompanying policies.

Downtown District . The policies for the Downtown District focus on placemaking, easy connections to transit, streetscape upgrades, recommended community benefits, and high-quality architecture and building facades. It includes a list of exact intersections or blocks where new development and amenities should be targeted – areas that are accessible to transit and accommodate mixed-use development. Key goals and policies are:

Bergamot Transit Village . The policies for this future light rail station are meant to foster a successful mixed-use neighborhood activated by open space, retail and dining, and served by a shared parking facility. A key distinction is that this transit village is designed to function as an “urban station,” with minimal parking and a strong transit/pedestrian focus, surrounded by high density development. Currently, the station area is composed mainly of light industrial or office uses. The vision is for lively, vibrant streets and retail-activated ground floors, and for new projects to consciously repair the existing superblock pattern with new streets, sidewalks, alleys, and pedestrian paseos. Examples of specific policies that support transit use are listed below:

The City of Burbank has taken a simpler approach to promoting transit-supportive places through its General Plan. Instead of calling for a study or plan to evaluate TOD incentives in the implementation actions, the General Plan itself includes a provision that allows for a flat 25% density bonus for TOD projects, with the stipulation that these projects are still subject to discretionary review (it is unclear whether this bonus is additive with the State density bonus or not – this is a dilemma that cities need to be aware of as they plan for greater intensity around transit). To balance out this added density, a separate policy calls for stepping down to single-family residential neighborhoods.

The City has classified a large area adjacent to its downtown Metrolink station and the sub-regional bus terminal as the “El Monte Gateway,” intending to create a 60-acre regionally significant, mixed-use community that integrates public transit, housing, parks/open space, retail, business, and entertainment. With the potential for up to 1,850 units in a mixed/multiuse environment, this transit-supportive place will also serve as a key activity center, which will help revitalize the city, create a central gathering place, and strengthen the core of the community. To facilitate the right type of development around transit, the City’s General Plan has several policies in place: 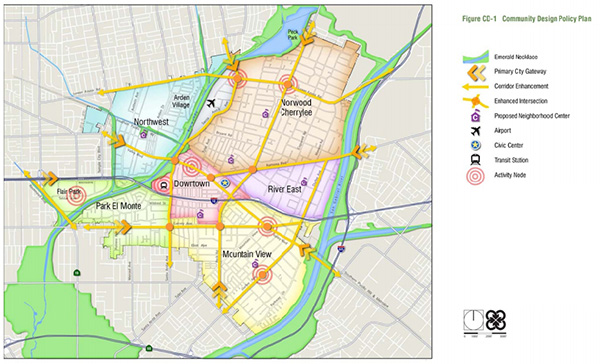 These policies have generated support for a new Downtown Specific Plan, which is currently being written. Putting the General Plan to work, the Specific Plan will include proposed alternatives and urban design ideas, as well as funding details and other next steps to enable transit-oriented development.