A General Plan is a local government’s long-term blueprint for the community’s vision of growth. 1 The California Supreme Court has eloquently described it as a “constitution for future development.” Each city and county in California is legally required to prepare a comprehensive, long-term General Plan to guide its future (SGC §65300). Most importantly, many or all other potential city planning actions (including subdivisions, capital improvements, development agreements, zoning and specific plans, and many other land use actions) must be consistent with the adopted General Plan. This legal requirement for consistency results in added importance in developing the land use designations in order to set the right tone for all future related planning efforts.

To promote transit-supportive places, cities can tailor their designations around transit stations to allow, encourage, or require the appropriate, transit-supportive types of uses and range of densities. Typically, land use designations near transit should allow compact densities, a mix of uses, reduced parking standards, and urban design that supports walkability and transit use. The scale of allowed development will vary within the region, with higher intensities located in downtowns and urbanized areas, and lower intensities in suburban or industrial contexts.

The designations set the tone for subsequent General Plan policies and actions, which provide guidance on capital investments, infrastructure improvements, and other physical and programmatic changes (see the General Plan Policies tool for more detail). At a minimum, to support transit-oriented development, a General Plan should:

Land use designations specifically related to integrating transit and land use, such as Transit Villages, also serve to demonstrate a City’s commitment to development that is designed and oriented towards transit. Additionally, developing a General Plan can generate community support for a vision of transit-supportive places. Going through the public process to settle on new designations (with the proper allowable densities) can help address neighborhood concerns around new, higher scale development. Creating community consensus is a valuable outcome of any General Plan visioning process.

The City’s General Plan has a special designation for the neighborhood surrounding a future light rail station: Bergamot Transit Village . With the goal of transforming the industrial area into a thriving transit-supportive district, the land use designation establishes a clear vision for the station area – in this case, a new mixed-use “village” that will attract creative arts uses along with a variety of housing types, entertainment and office uses and local-serving retail to establish a vital, new complete neighborhood. Within that vision statement, the City defines the types of allowed uses and preferred ground floor character that they expect from new development around the station.

The General Plan also has specific regulations that aim to maximize the likelihood of a successful transit-oriented neighborhood, including building height guidelines (along with accompanying graphical illustrations) and various FAR bonus tiers that are tied to the provision of community benefits. The base height in the Bergamot Transit Village District is 32 feet/2 stories with a 1.75 FAR, but this can be increased significantly with bonuses (up to 75 feet and 3.5 FAR). Statements in the designation description such as “new development incorporates human-scale elements, enhances the pedestrian environment, and is built to the sidewalk with minimal setback” translate to clear requirements that create a walkable and transit-oriented district. 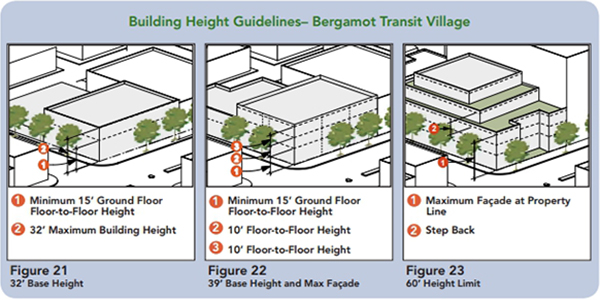 The Community Design chapter of the South Gate General Plan begins with a series of vision statements to communicate the desired design strategies for key areas. Specifically, several of them are highly transit-supportive:

The City’s General Plan also contains two land use categories intended to promote development around transit and mixed-use buildings. The first, “Urban Village,” provides for vertical and horizontal mixed-use developments that increase residential and employment opportunities in existing and future transit-rich areas of the City. The density is higher than is allowed in other corridor designations; 41-100 units/acre, 0.5 to 2.5 FAR, and up to 8 stories. Other key characteristics of the designation include:

On top of base designations, the City layers on districts, such as the “Gateway District,” where the Urban Village place type is highly desired. No specific densities are prescribed; instead, the allowed place types are listed, which gives some flexibility. This additional regulatory layer provides specific policy guidance for geographically distinct areas, such as existing or planned stations. The vision for the Gateway District is that the potential station area becomes a dense “transit village” that includes new residential and/or office uses. Supporting language includes:

There are multiple land use designations that support transit-supportive districts and places. In particular, the Downtown Commercial designation is correlated with a major transit center. Since Downtown is a community center with high levels of transit access, it is appropriate for Downtown to have a higher allowable intensity of development than other areas of the community – a maximum of 2.5 FAR, and 87 units per acre with discretionary approval. Supplemental goals and policies for this area are found in the Burbank Center Plan, a detailed plan that regulates new development in the urban center.

Palmdale’s General Plan includes a land use designation for Transit Village, an area of about 100 acres in the Downtown adjacent to the Metrolink Station. The Transit Village allows much denser residential development than is permitted in the rest of Palmdale. Adopting this designation was an important step for the Palmdale community as there is a need for more dense multifamily housing in a pedestrian environment that cannot be built under current standards. In 2007, the City adopted a Specific Plan for the area, which refined the allowable densities and other development standards (the Plan is currently being updated in 2016 to reflect the impact of the future high-speed rail station on the Downtown area). The Transit Village designation is divided into neighborhoods and use types are allocated by neighborhood rather than zoning. The three types of permitted residential development are single-family, multifamily, and mixed use.

The table on page H-121, Transit Village Development Standards, illustrates how density should be scaled around a transit station, and suggests the appropriate density range and character for the existing urban context in Palmdale.

These development standards were adopted into the General Plan. The area surrounding the future transit village was physically divided into nine Neighborhood Zones (A through I), as shown in the figure. Different standards for allowed use, residential density, setbacks, and other criteria apply within each respective zone.

Chapter 5, Urban Form and Neighborhood Design. The City’s framework plan includes ‘model’ density guidelines for development around transit, intended as a model for community plans. These suggested height tiers demonstrate how the appropriate scale of development should vary according to the type of transit service and other characteristics of the surrounding neighborhood. They also distinguish between rail and bus transit, and assume a larger catchment area for more frequent service. While densities and distances will vary based on local conditions, the following residential density standards, which are based on the City's adopted Land Use/Transportation Policy, are used as a general guide when updating community plans through a public participation process: