A form-based code is a land development regulation that replaces traditional zoning codes. Using physical form rather than separation of uses as the organizing principle for the code, they aim to produce predictable built results and a high-quality public realm. 1 A form-based code is a binding regulation, not a mere guideline. Form-based codes can be adopted into law as part of a Specific Plan process, a General Plan update, or as a focused addition to a comprehensive zoning code update. 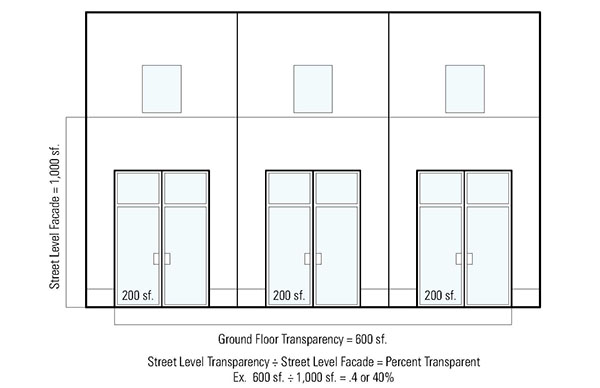 Form-based codes (FBCs) focus less on the type of activity taking place inside a building (i.e. the use) and more on the overall form and character of a neighborhood. While use is still regulated, more emphasis is placed on the placement and form of buildings, the character of the street frontage, and the relationship between buildings and public spaces. By regulating the design of new development, form-based codes address the size and mass of buildings in relation to one another. Form-Based Codes are presented through graphics, charts and minimal text, with a focus on readability and a succinct presentation style.

There are several benefits of FBCs for transit-supportive places:

Although they may include the same categories of elements as Design Guidelines, Form-Based Codes are regulatory, rather than elective.  Form-Based Codes typically replace existing conventional zoning codes for a particular area. Form-Based Codes can apply to a particular zone, a collection of zones, or apply city- or town-wide.  A Form-Based Code may be adopted for a “Transit Village,” an area of ¼ or ½ mile around a transit stop or transit corridor, or several station areas or corridors combined together; or more broadly for a whole city or town.

To handle the expected changes around the Gold Line stations of Indiana, Maravilla, Civic Center, and Atlantic, located in the unincorporated community of East Los Angeles, a Specific Plan and form-based code were created.

The Third Street station areas will be encouraged to transform into “transit centers” with vibrant mixed-use buildings containing retail shops, restaurants, or offices that support both the community and will serve as a destination for visitors and commuters. A variety of housing types will be promoted near stations to accommodate residents of different ages, incomes, and household sizes. Each station area has a vision (“important gateway,” “strong visual identity and functional cohesion,” “comfortable, vibrant places,” etc), and a strategy (“accommodates urban, mixed-use building types,” “massing and scale of buildings that face Alma Avenue will be residential in character, while the portion facing the station will be more commercial in character,” etc). Examples of helpful transit-friendly standards in the plan include:

The City of Lancaster created specific zoning around its Metrolink station in order to promote new, mixed-use development. The zoning implements the community’s vision and expand the ongoing revitalization by providing unique and focused development standards that enable and promote high quality, walkable, mixed-use and transit oriented neighborhoods. The new zones are: 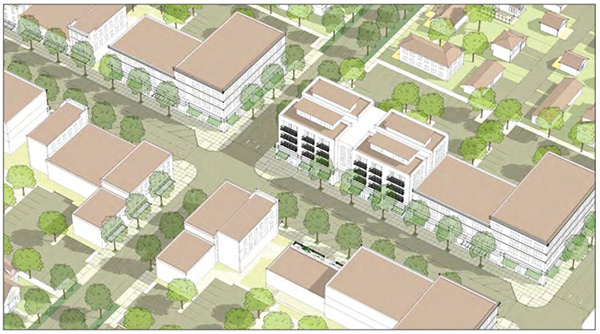 The zoning code is “vision-based” and describes community expectations for the urban character and form of these neighborhoods. These place-specific zones encompass the subjects of land use and development intensity, but also include significant amounts of information about the design of the neighborhood streetscapes, the scale and form of new buildings, and the intended physical character of each area. The Plan contains a menu of allowed building types and frontage types by zone, creating a clear physical expectation for new development.

The Cornfields Arroyo Seco Plan (CASP) area is in the communities of Lincoln Heights, Cypress Park and Chinatown. The Plan area includes two Gold Line Stations and is adjacent to a third. Having languished as an underused, underdeveloped district for decades, the Plan strives to transform roughly 660 acres of mostly industrial and vacant uses to a more residential area mixed with light industrial areas designed to attract green and environmentally clean businesses. A form-based tool was used to implement the community vision, and to provide flexibility and certainty for both developers and neighbors. Certainty for neighbors, who have discussed and generally approved the types of allowed projects – how dense, how high. Certainty for developers, as the Plan provides very precise guidance on intensity, building form and design, and street frontage character. Very little in the code is discretionary or subject to review – rather, mathematical formulas dictate the amount of floor area available in different zones and with the application of various bonuses. Affordable housing and community benefits are rewarded; for example, applicants may add 3 square feet of floor area for each square foot of public open space, and 6 square feet of floor area for each square foot of Community Facility space.

This zoning code is a Hybrid Code that regulates form as well as land use. As with many Form-Based Codes, this Transit Zoning Code uses a Regulating Plan that divides the plan area into zones based on a transect of intensity from most urban to least urban:

The Transit Village, which is the densest urban zone, has a 25 story height max for a Tower-on-Podium building type and allows 7 out of 12 building possible types, whereas the least dense zone, UN-1, has a 2 story height max and permits only 4 out of 12 possible building types. In other words, the densest and more urban zones permit bigger buildings with more varied types.  Parking requirements are reduced slightly as the zones intensify and parking in-lieu fees are only available in the denser zones. Other key aspects of the code are:

As part of a comprehensive zoning update, the City of Azusa elected to move forward with a form-dependent regulatory geography. The form-based code is mandatory and separates the City into 17 planning areas of distinct character. Within these planning areas, there are three types of regulatory areas that correspond to distinctive local conditions: Neighborhoods, Districts and Corridors. Neighborhoods have a mixed-use center unless in proximity to another mixed-use focal point. There is a city-wide regulating plan but each neighborhood follows a separate regulating plan divided into four neighborhood zones with both guidelines and standards. Districts and Corridors have their own regulating plans and sub-areas as well. The code is highly illustrated and envisions a town of distinct and compact neighborhoods surrounding a vibrant downtown. Extensive fieldwork, public participation and input from City staff established the boundaries, existing and desired character, and physical conditions of the City and, in addition, helped to envision the future of each of Azusa’s existing places.

Master planning for the SMART train station areas in downtown Petaluma generated a form-based code. Examples of helpful transit-friendly standards in the plan include:

Other tools, toolkits, resources, or manuals that influence or relate to this tool