Corridor plans are a variation on the concept of Specific Plans, but they are distinct from station area plans in that they attempt a broader strategy of coordinating development, investment, destinations, access, and other policies across multiple transit stations or stops. Certain types of transit service (bus rapid transit and light rail in particular) usually take the form of many-miles-long stretches of tracks and/or boarding facilities along existing street corridors. Adopting a Corridor Plan and developing an integrated community vision creates an opportunity to transform the land use and character of the entire length of these arterials at the same time as new transit is built. 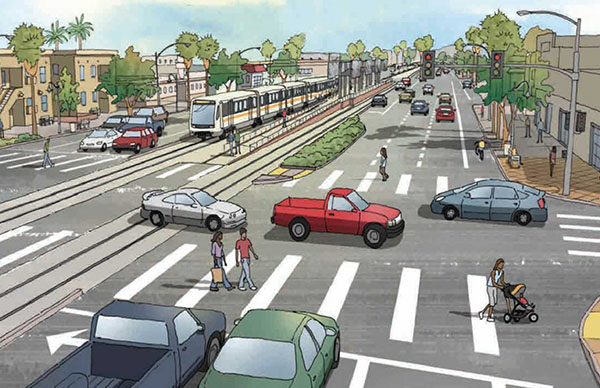 A common pre-existing context for a corridor plan is where “strip” commercial uses are bordered at the rear by residential neighborhoods. These retail establishments are often aging and/or non-conforming, and residential infill development may be stymied by small parcel sizes which makes redevelopment more challenging due to economic and physical constraints. 1 Typical content for a corridor plan includes standards and guidelines for new development, direction for potential street/streetscape improvements, and implementation actions. Other issues that a corridor plan can address are parking (which becomes increasingly challenging as uses intensify at key locations), pedestrian/vehicle conflicts, and improved multi-modal access (both along the main arterial and side streets).

The purpose of the plan was to examine how transit-oriented development could occur at each of the 14 stations along the Orange Line Bus Rapid Transit line. Key project components were as follows:

Some of the transferrable lessons learned on the project included: 1) each station is unique and a one-sized fits all approach to transit-oriented development does not work when creating a corridor-wide plan; 2) methods of increasing transit ridership vary by station – for some it will be through increased density and for others it will be from transportation infrastructure improvements; 3) developing a corridor wide vision and marketing campaign is crucial; and 4) investment in BRT can increase property values, stimulate development, and lead to further improvements along the corridor. 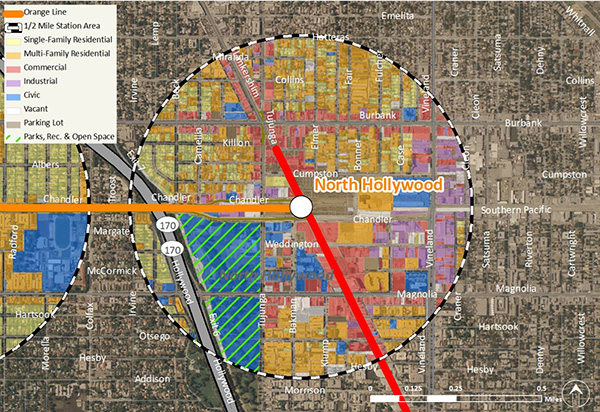 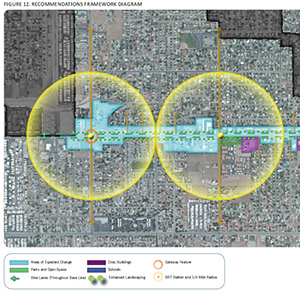 In the City of Highland, the General Plan provides a solid foundation for transit-oriented development, and no fundamental changes to land use designations were needed. Most of the area covered by the BRT Vision Plan is zoned as “Mixed Use (MU),” which allows for an integrated mix of residential, retail, service, civic, entertainment, and office uses, up to 18 du/acre and 1.0 maximum FAR. However, additional implementation was required to foster attractive and sustainable places served by bus rapid transit along a safe and multi-modal Base Line corridor. Thus, the Specific Plan was adopted in order to define policies and recommendations at a high level for design of streets and amenities around stations and improvements for transit access. Key objectives of the Specific Plan were:

The context in downtown Highland is distinctly different from the more urbanized development in many other potential development locations near transit. Additionally, plans for bus rapid transit (BRT) are distinctly different from rail-oriented plans, as this Corridor Plan illustrates well. Maximizing the effectiveness BRT requires careful attention to the design of the streetscape, pedestrian amenities, parking lots, and loading areas. It is also critical to calibrate the allowed density/intensity and improve multi-modal connections so that they that compliment BRT. Recommendations for a bus rapid transit corridor in Highland were carefully tailored to respect community preferences articulated in the General Plan and through input from community stakeholders.

The El Camino Real is a major arterial corridor that runs through the City of Mountain View in the Bay Area, and is anticipated to have up to three bus rapid transit stations in the near future. The corridor will eventually stretch from San Jose to San Francisco. To shape the development along the corridor, the Precise Plan used a strategy that focuses more intensive development and public improvement at key intersections. This strategy coordinates new residential development with streetscape improvements and transit service, while still allowing a range of commercial and residential uses. To appropriately respond to the arrival of transit, the Precise Plan differentiates between Village Centers and Neighborhoods.

Small-scale retail intersections located at smaller cross streets with direct access to adjacent communities are designated as Neighborhood Corners. The intention is for there to be additional amenities at these intersections such as gathering spaces or community facilities, and pedestrian improvements will increase pedestrian comfort and access from adjacent neighborhoods.

As shown in the accompanying table (found on page 16 of the Plan), allowed intensity varies by the urban context of the corridor. Additionally, project applicants can earn bonus FAR in exchange for defined benefits and/or contributions. Table 15 lists the benefits that the City will accept, and specifics on how the benefits are to be constructed or transferred.

This Precise Plan also contains detailed standards for transitioning from corridor projects to adjacent uses (graphics and policies on this topic can be found on Page 30). A “precise plan” is similar to a Specific Plan in most ways, except for the absence of some statutory requirements.

The Plan facilitated a broad range of dialogue, ideas and discussion that established the basis for a vision plan for Crenshaw Boulevard between the Interstate 10 Freeway to the north and Martin Luther King Jr. Boulevard to the south. The Vision Plan prioritizes the opportunities created by the introduction of a new light-rail station stop at the intersection of Crenshaw Boulevard with Exposition Boulevard.

The City and the community formulated corridor improvement concepts for urban design, streetscape, traffic mitigation, identity and economic development. Through a series of community workshops, focused public task force meetings with local leadership and an interactive website/blog. The Plan was able to set the tenor for future development and set a clear agenda for infrastructure and other supportive improvements that would enable the desired vision for the Crenshaw corridor.