The Rail to Rail/River Active Transportation Corridor Project – spanning approximately 10 miles – will convert an existing, underutilized railroad right-of-way (ROW) into a multi-purpose pedestrian and bicycle transportation corridor on the western end of the corridor and create connections to the Los Angeles River on the eastern end of the corridor.

Upon completion, the Rail to Rail/River Active Transportation Corridor Project will link neighborhoods, schools, and other key destinations through the heart of South Los Angeles. Most notably, the Project will facilitate:

The Project will provide a pedestrian and bicycle corridor that will connect the Cities of Los Angeles, Inglewood, Huntington Park, Vernon, Maywood, Bell, and parts of unincorporated Los Angeles County. The Project area is largely composed of a mix of high-density neighborhoods, commercial centers and industrial uses.

The Rail to Rail/River Active Transportation Corridor Project is a single pedestrian and bicycle corridor composed of two distinct segments, each in a different phase of development. Segment A is the Rail to Rail component and Segment B is the Rail to River component. Together, they will form one path, stretching from South Los Angeles to the Los Angeles River.

In 2012, the Metro Board of Directors (Metro Board) requested staff to assess the feasibility of repurposing the Local North Section of the Metro-owned Harbor Subdivision rail right-of-way (ROW) as an active transportation corridor. The resulting Rail to River Intermediate Active Transportation Corridor Feasibility Study (Feasibility Study) in 2014 indicated that a bike and pedestrian path along the Project corridor would provide significant enhancements to the regional transportation network, while creating innovative environmental, economic, and mobility benefits for the surrounding communities. In October 2014, the Metro Board approved funding for environmental clearance, design, and outreach for Segment A, as well as the Alternative Analysis for Segment B.

Currently, pedestrians and bicyclists travel along the Project corridor with very few facilities to support their travel patterns. Safe, comfortable, and convenient access for existing bicycle and pedestrian volumes is significantly impeded by restricted amenities on the south side of Slauson Avenue, with narrow and over-crowded sidewalks.  On the north side of Slauson Avenue (location of the Project ROW), sidewalks are non-existent, creating inadequate passage for all users, including bus rider access to multiple bus stops along the Project corridor.

The improved connectivity of public transportation networks will provide local residents with more transportation choices by connecting to the Metro A Line, J Line (through the I-110 Harbor Freeway Transit Way), and the future Crenshaw/LAX and WSAB LRT Lines. The Harbor Subdivision rail right-of-way has been underutilized for many years, but this project will support many local and regional planning efforts (such as Metro’s First Mile Last Mile Strategic Plan, Complete Streets, and 2012-2035 Regional Transportation Plan and Sustainable Community Strategies) to improve the quality of life in Los Angeles County. 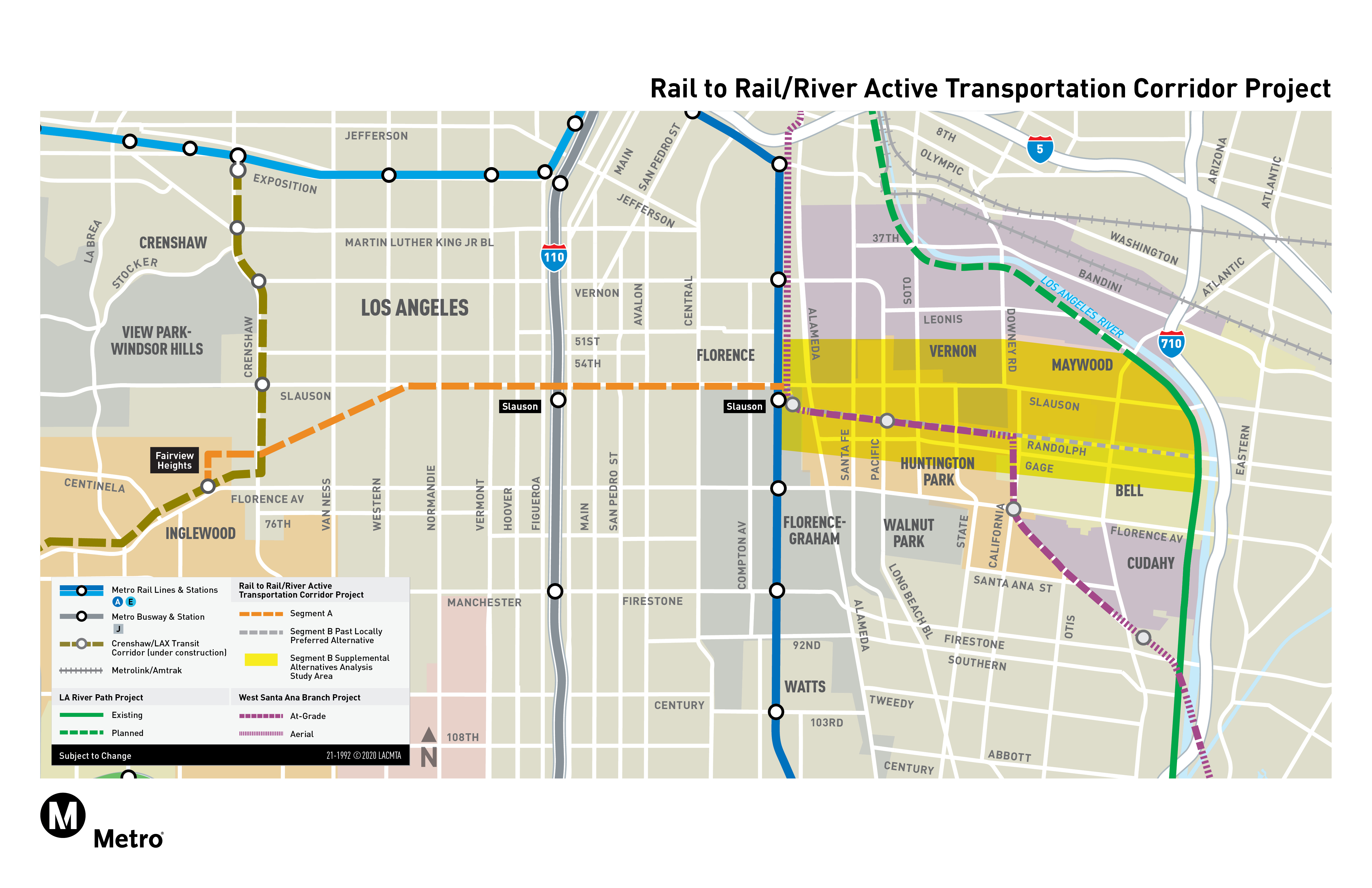