Green Line rail service will be suspended between Crenshaw Station and Redondo Beach Station beginning at 9 pm, Friday, January 4, 2019, through 3 am, Sunday, January 20, 2019.

Replacement Bus Shuttle Service (Line 853): A free Green Line bus shuttle will be provided to service all closed stations between the Crenshaw Station and the Redondo Beach Station during this time. 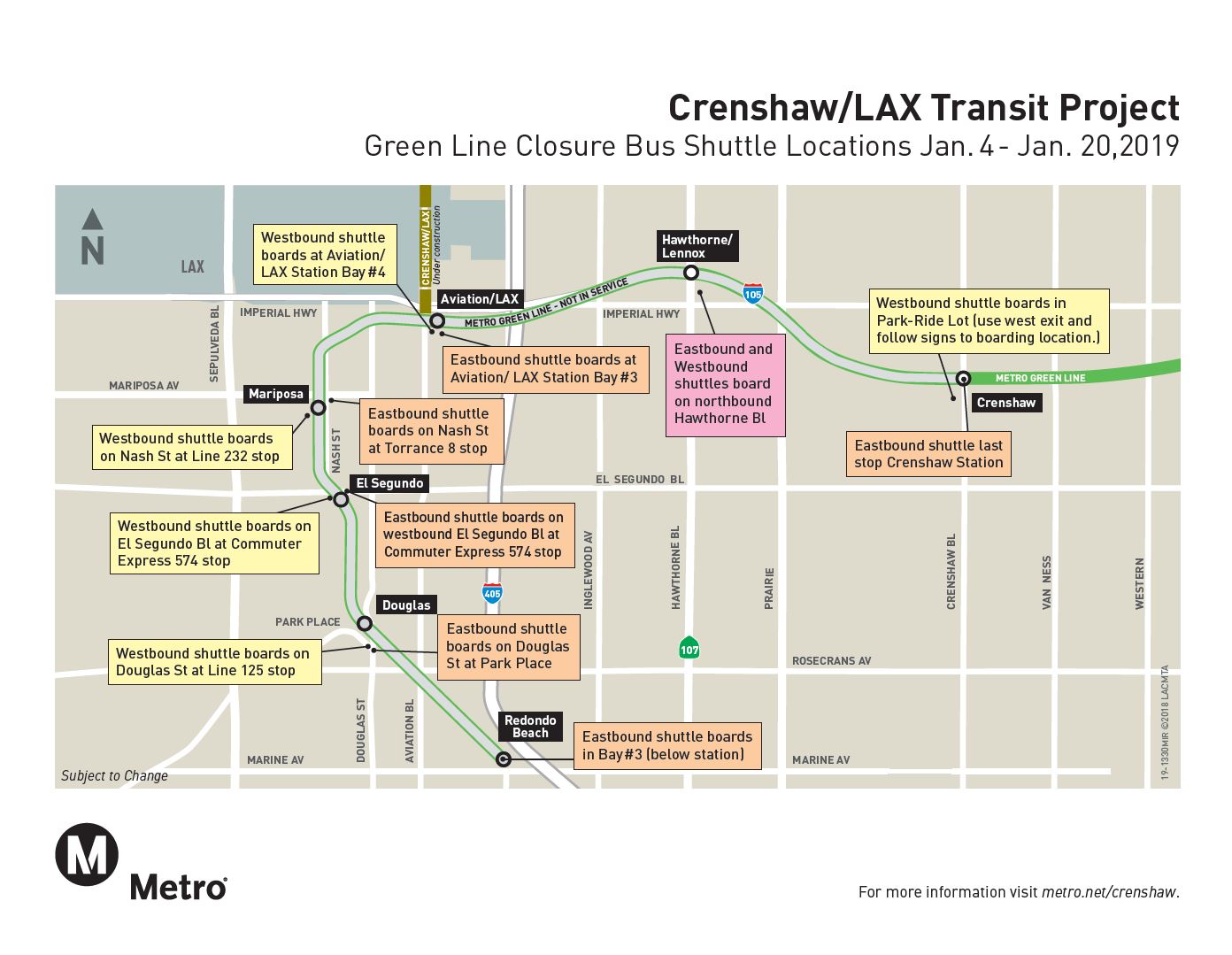 How long will the Green Line closure last?
Service will be suspended beginning at 9 pm, Friday, January 4 and resume at 3 am, Sunday, January 20, 2019.

How often will the free bus shuttles be running?
The free Green Line Bus Shuttle, Line 853, will match the existing Green Line frequencies, that is every 6 minutes in the AM and PM peak hours (Monday through Friday, 6-9am and 3-7pm), every 15 minutes in the midday and weekend times, and every 20 minutes after 8 pm.

What buses and shuttles will be impacted during this closure?
All Metro and municipal bus services are expected to operate their normal routes and schedules. The LAX ‘G’ Shuttle that serves the LAX airport terminals will continue to serve the Aviation/LAX Station bus bays. Passengers destined to LAX should ride the free Line 853 bus shuttle to Aviation/LAX Station and transfer there.

Are there other public transportation options to LAX?
Yes, in addition to the LAX ‘G’ Shuttle, there are many bus routes to the LAX City Bus Center on 96th Street near the airport. Consider taking Metro Lines 102, 111, 117, or 232 to LAX City Bus Center (also served by Beach Cities Transit 109, Torrance Transit 8, Culver City 6 / R6 and Big Blue Bus 3/ R3).

Upon arrival at the LAX City Bus Center, transfer to the free LAX Shuttle which serves all airline terminals.

For questions and concerns please reach out to us by calling or e-mailing our contact details below.