Metro is working to meet the growing demand for transit in the northern portion of the San Fernando Valley and to make transit service more accessible, inclusive and responsive to the needs of the diverse communities it serves. The North San Fernando Valley Bus Rapid Transit Project (North SFV BRT) is a proposed new 18-mile Bus Rapid Transit (BRT) line that would enhance existing bus service and increase transit system connectivity. The Proposed Project is a new, high-quality bus service between the communities of Chatsworth to the west and North Hollywood to the east. The primary east/west streets for this new service include Nordhoff Street and Roscoe Boulevard and all alternatives include a station connection with California State University, Northridge (CSUN). The proposed bus routes and stations were developed to connect the places where a BRT line would be most successful, help the most riders, and do the best job of taking cars off the road.

High-capacity east-west transit service in the North San Fernando Valley, especially service to CSUN, will ease traffic and meet the growing demand for transit in the San Fernando Valley. A more convenient and faster bus service that is more frequent and reliable, links key activity centers, and improves access to jobs, education, and essential services will contribute to the success of the countywide transit system by adding connectivity to a large population and generating significant new transit trips. 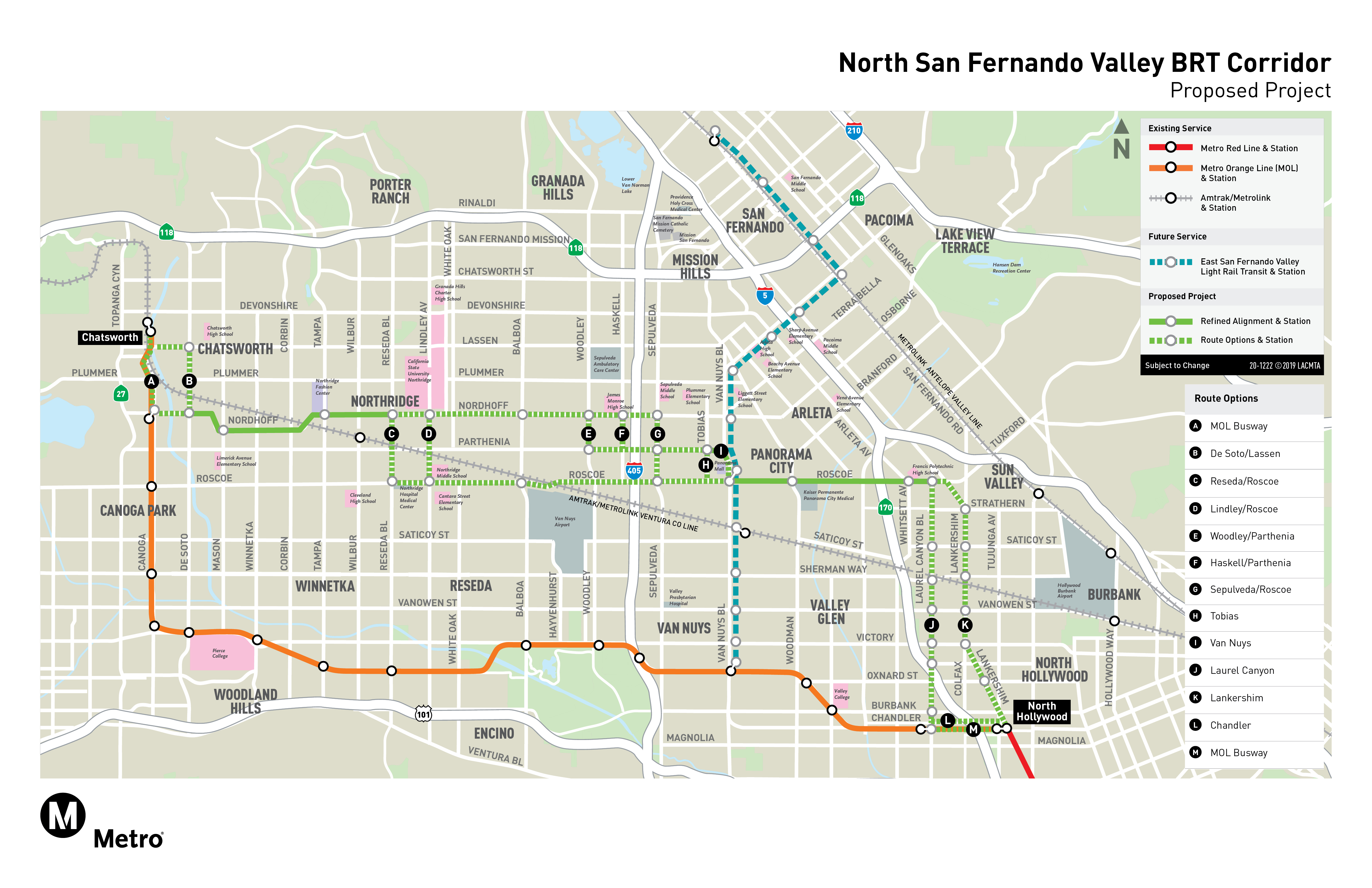 In October 2019, the Metro Board received the Final Alternatives Analysis study and approved additional study of the Proposed Project as part of the Environmental Review phase.  The next phase of study will develop additional details for the proposed routes, station location and amenities, street design, and BRT infrastructure including signal priority or other innovative solutions to deliver high-performing transit. Consideration will also be given to enhancing connectivity with other existing or planned transit lines such as the Metro Orange Line, Metro Red Line, future East San Fernando Valley Light Rail Transit , and future North Hollywood to Pasadena BRT .

Another related project happening in the San Fernando Valley is Metro’s NextGen Bus Study which is proposing to redesign the entire Metro bus network with a focus on increasing bus travel speeds, frequency and reliability. NextGen will also facilitate the identification and prioritization of other future segments. The NextGen Bus Study will coordinate and share data with BRT study teams in order to improve bus speeds and maximize Metro’s investment in future corridor segments. This is the first major overhaul in 25 years and it is important that our bus system integrates with all the ways Angelinos travel today, with flexibility built in for the future. The North SFV Project will continue to coordinate closely with the NextGen Bus Study and the City of Los Angeles to ensure that the proposed BRT improvements fit within the future regional bus transit network.