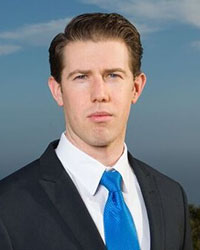 Mr. Campbell started his professional career at the U.S.’s largest exporting company, overseeing logistics and operations. He then transitioned to finance and operations at Sony Pictures Entertainment. Mr. Campbell was instrumental in helping Sony Pictures overcome the obstacles set forth during the 2014 North Korean cyber-attack.

Mr. Campbell was raised in the San Fernando Valley, earned his B.S. in Business Administration from the University of California at Riverside, and is in the process of attaining his M.B.A. from Pepperdine University. He currently resides in Hollywood where he enjoys hiking Griffith Park and painting in his spare time.