About the I-605 Corridor Improvement Project
The Interstate 605 (I-605, the San Gabriel River Freeway) is one of the busiest and most congested transportation corridors in Los Angeles County, specifically between Interstate 105 (I-105) and Interstate 10 (I-10). Growth in the region’s population, employment, as well as in goods movement, are expected to further pressure the existing traffic capacity and operations on I-605. To ease congestion and support future growth, operational, capacity and safety improvements are needed for residents, businesses, travelers, and interstate commerce.

The project also proposes to include improvements to the following major interchanges: I-105, I-5, SR-60 and I-10. Improvements to I-605 will enhance free operations, improving chronic traffic problems on one of Southern California’s most congested freeways.

Funding
Project studies are being funded through Measure R local sales tax. Metro will pursue additional federal, state and other sources for future phases of the project.

The I-605 serves as one of the few major north-south interstate freeways in the greater Los Angeles Area of Southern California, running roughly 27 miles from the coast in Seal Beach, at its most southerly point, to the foothills in Irwindale/Duarte in the north. The operational conditions along the project corridor are deteriorating. In order to improve local circulation and connectivity to interstate commerce, I-605 improvements are necessary.

The I-605 provides public transit access to the Metro C Line (Green) light-rail in Norwalk Station at I-105, Metro Express Bus Line 577 running between I-10 and I-105, and a primary connection to the I-10, serving westbound Metro J Line (Silver) riders at the El Monte station. Moreover, a number of Foothill Transit Commuter Express Lines run from the I-10 to SR-60 by way of the I-605.

Unfortunately, I-605 has gone without major system-wide improvements for roughly 50 years, since the construction of the first segment, Interstate 405 (I-405) to State Route 60 (SR-60), dating back to 1964 and the later portion completing construction in 1971.

Persistent congestion during AM/PM peak travel times is especially pronounced within the project limits. The project alternatives seek to improve overall circulation and safety. The I-605 project proposes improvements from approximately two miles south of the I-105 interchange to approximately two miles north of the I-10 Interchange; including enhancements to the SR 60, I-5, I-10 and I-105 interchanges. 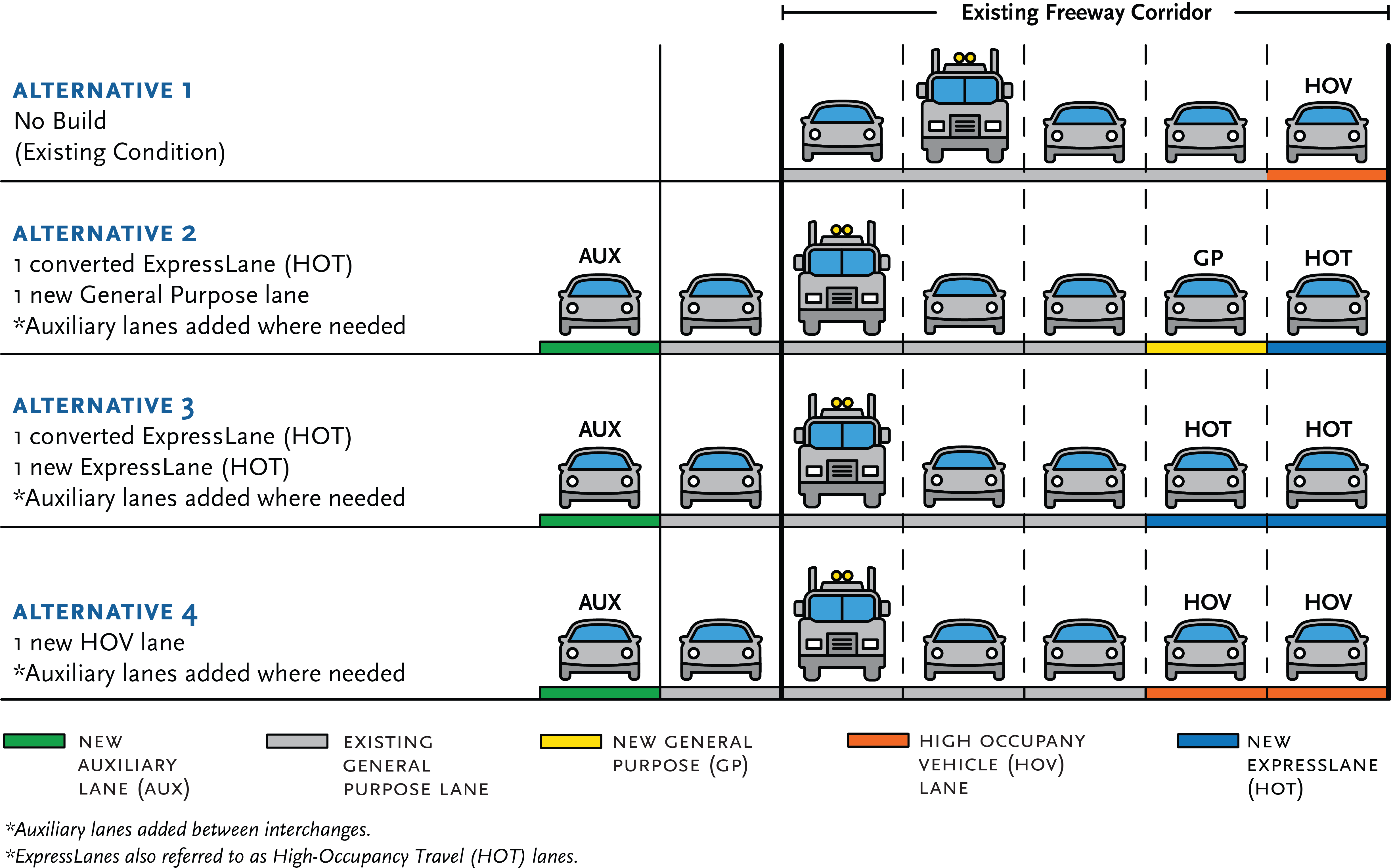 The project proposes work to on- and off-ramps, bridges, underpasses, and local connecting roadways which will greatly improve circulation on local streets and improve access to businesses, benefiting residents, travelers, commerce, and local communities. These include:

Local Improvements by Jurisdiction
The project area includes nine cities and a number of county island communities. The table below outlines the range of additional local improvements proposed for each jurisdiction. See the project improvement map for reference. 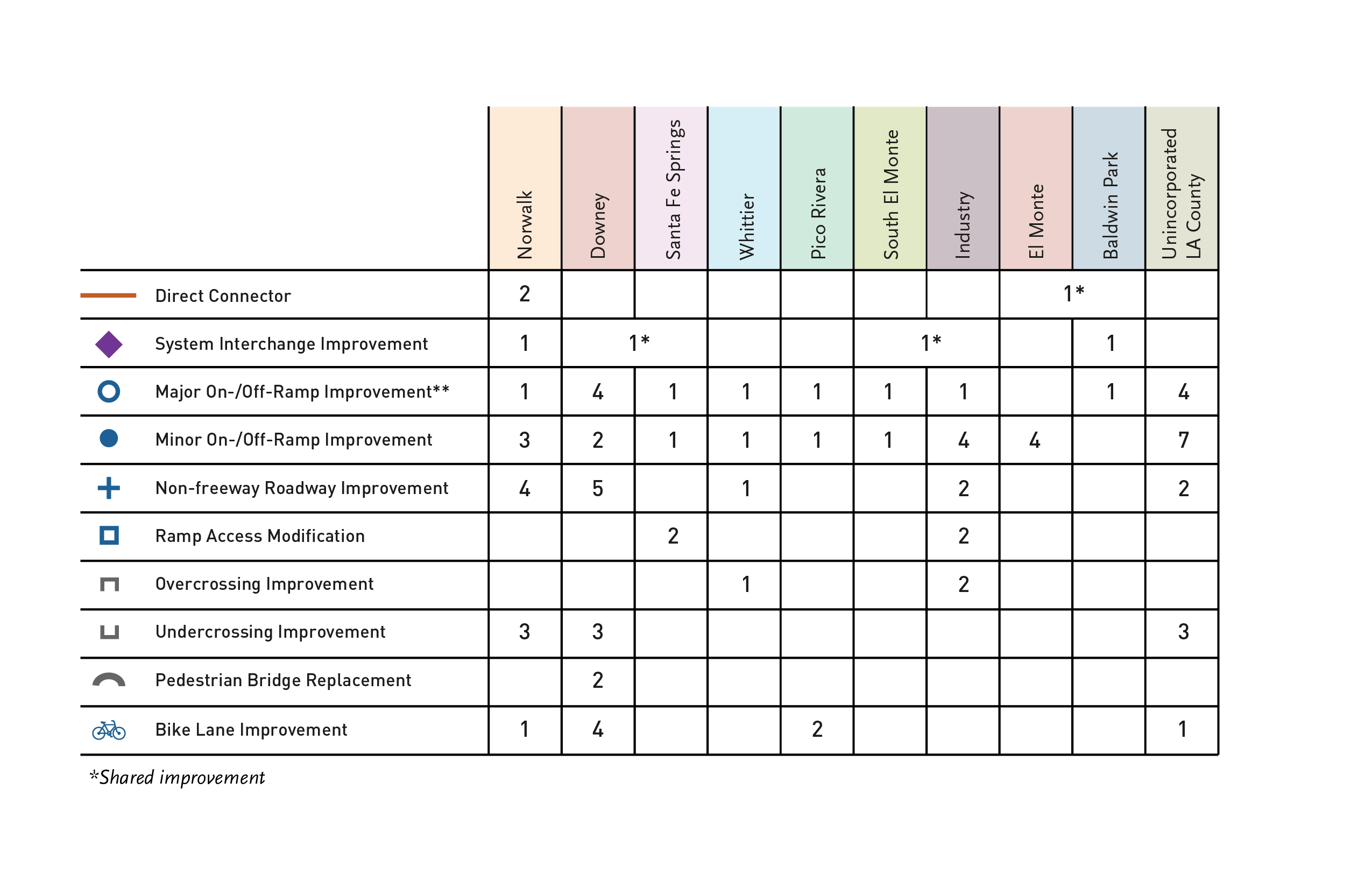 The public has multiple opportunities for involvement during the environmental phase and is strongly encouraged to participate. A series of public meetings (see tab below) will be held in the study area to coincide with major project milestones. Public hearings will be held following circulation of the draft environmental documents. Comments and questions can be submitted at the meetings, submitted via regular US mail, or shared by phone at 213-922-4091. Interested parties are also encouraged to stay connected by signing up to receive project notifications.

The EIR/EIS is a legal joint document required under the California Environmental Quality Act and the National Environmental Policy Act (CEQA/NEPA), respectively. Upon completion, the document will:

A draft EIR/EIS will be publicly circulated for comment prior to completing the final EIR/EIS and selection of the Preferred Alternative. The environmental phase is scheduled to conclude in the spring of 2021.

Public hearings are planned for summer 2020. Metro will continue to engage stakeholders throughout the study process and provide opportunities to: