What is Cutter Soil Mixing All About? 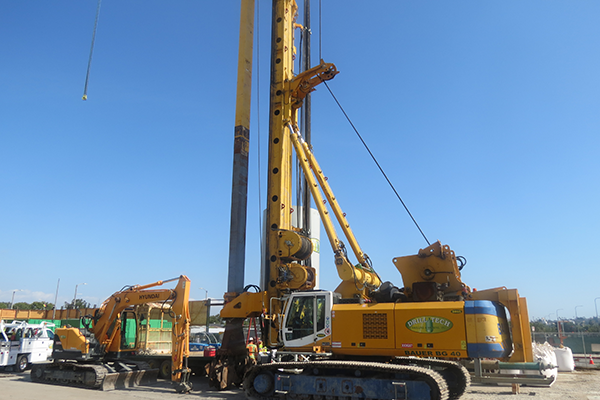 Cutter Soil Mixing (CSM), a modern and unique method of constructing shafts and walls, will allow Metro contractors to increase productivity and safety. By mixing and stabilizing loose soil, then using it to support excavation, building the underground stations of the Crenshaw/LAX Transit Project should be quicker and safer.

The Cutter Soil Mixer rig, an impressive machine that measures over 100-feet tall, actually mixes the soil while it cuts into the ground. The Crenshaw/LAX Transit Project will employ a rig with two rotating, toothed wheels to loosen soil; each wheel can rotate in opposite clockwise directions. A nozzle located between the wheels injects fluid, a chemical named bentonite, to mix with the loosened soil, creating a plasticized and uniform soil mass which allows easier ground penetration.

Once it has cut to its assigned depth, the mixing tool is slowly raised and cement slurry, a mixture of cement, water and other additives, is poured into the mixing tool, adding to the bentonite slurry, a mixture of bentonite and water. The rotating cutter wheels then mix the soil-bentonite slurry with the cement slurry. After 72 hours the soil-cement mixture hardens into a weak concrete-like material, offering more support of the new excavation than more traditional techniques.

This method allows Metro’s contractors to build earth retaining CSM panels in areas that have higher water tables. This process strengthens the area around the underground station structures, including the endwalls, temporary structures used to support the earth prior to it being penetrated by the Tunnel Boring Machine.

When building the 7 ½ foot-wide panels, for example, instruments inside the cutter heads relay exact coordinates of the mixing tool to a computer display inside the rig operator's cab. These real-time updates assure complete mixing of slurry and mixed-soil, the material used to construct the CSM panels in the excavated area. Once all of the panels have been formed they make up the retaining walls around the shaft the tunnel boring machine will enter.

Once the walls have been constructed in the excavated area, the Cutter Soil Mixer rig design allows for placement of reinforcing beams at every five feet along the length of the newly constructed walls which reinforce their structural integrity. Once the walls have fully been erected around the excavation, either a mud mat or a soil plug (used interchangeably) can be used to seal the hole from any water seepage.

The type of wheel used in the Crenshaw/LAX Transit Project matches the soil located near the underground tunneling. For locations with cohesive soil, a four-tooth cutter wheel is typically used, as it excels at mixing soil and slurry. Locations with dense non-cohesive soil, such as soil with stones, usually require a three-tooth holder wheel, as it excels at cutting.

For more information on constructing the Crenshaw/LAX Transit Project, visit metro.net/crenshaw on Twitter at @crenshawrail , or Facebook at crenshawrail or call us at 213.922.2736. To join our email list and receive daily lane reductions, write us at crenshawcorridor@metro.net .