Armen D. Ross is President and CEO of The Ross Group, Inc.  He leads a team of consultants that provides public affairs, government relations, and community relations services to clients with economic development, land use planning, entitlement processing, building permitting projects that come before local, state, and federal government. 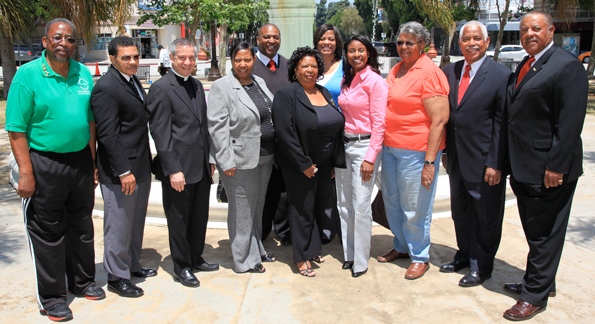 Hildred Brown is owner of Earlez Grille at Crenshaw and Exposition Boulevards. Ms. Brown was a three-term board member on the 8th Council District Community Advisory Committee and two terms on the 8th Council District Empowerment Congress. Ms. Brown has served on the Leimert Park Steering Committee for the revitalization of the Leimert Park community.

Willie Brown is founder and president of Ads Up Advertising, Inc., publisher of Inglewood Today, ‘Today’s Magazines’ and L.A. Crenshaw Today. He chaired the City of Inglewood Civil Service Board of Review, and founded the Inglewood Business Opportunity Network (lBON).

Priscilla Cheng serves as the Economic Development Director for the Los Angeles County Federation of Labor, AFL-CIO. She oversees the creation and coordination of policy advocacy efforts that create and preserve good, middle class jobs.

Karl Schow is a 27 year member of the Los Angeles County Sheriff’s Department. Karl is currently the Transit Bureau South Captain. His area of responsibility includes the Blue, Green, and Expo Rail Lines as well as Metro buses in the Gateway Cities and South Bay sectors. While assigned at Transit Bureau, Karl has worked as a watch commander, Red Line Area Lieutenant, and Operations Lieutenant prior to being promoted to Captain.

Angela Gibson, Director at AT&T, is responsible for public policy and community relations activities in the greater Los Angeles area. She is also the corporate liaison to selected federal and state officials. She also serves as president of the Greater Los Angeles African American Chamber of Commerce.

Erick Holly is Executive Director of the Inglewood/Airport Area Chamber of Commerce, a position he has held for 4 years. Mr. Holly is former owner of MEM Automotive. He is a 10-year United States Marine Corps veteran.

Taylor Mayfield is a member of the board of SCOPE/AGENDA. Mr. Mayfield is president of Crenshaw Neighbors, Inc. He chairs the Empowerment Congress Public Safety and Justice Committee. He was two-term past president and a founding member of Baldwin Village Community in Action (BVCIA).

Rev. Jackie Russell is Director of Community Services for Faithful Central Bible Church. She is a member and past Chair of The Board of Directors for the Emergency Network of Los Angeles and the author of “Disaster Preparedness Guide for Worship Centers.”