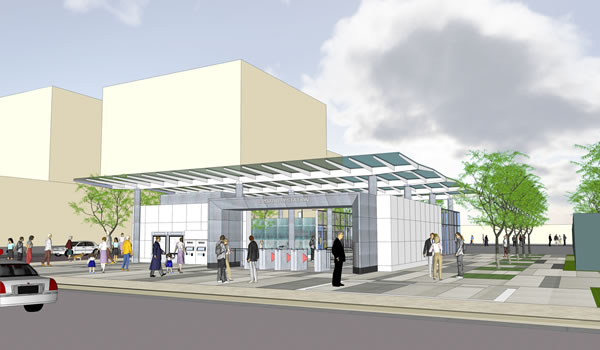 The rich history of the birth of Downtown Los Angeles surrounds the location of the new 2nd St/Broadway Station.  The streets of Historic Downtown Los Angeles include two nationally registered districts:  The Broadway Theater District, which includes the remnants of 12 theaters within seven blocks, and Old Spring Street, which is known as the original Financial District of Downtown Los Angeles.  Broadway is one of the oldest streets in the city and it was laid out as part of the 1849 street plan.  Broadway was also the home to streetcars, which were heavily utilized by shoppers and workers between 1901 and 1963.

The Historic Core and the Civic Center areas combined contain the second largest concentration of government employees in the United States outside Washington, D.C.  The new station will be the hub for both government employees and tourists alike.  With the connectivity to Downtown, a visitor can hop on the train and go to the 2nd Pl/Hope St Station to visit the cultural hub of Downtown Los Angeles or to the 1st St/Central Av Station to visit historic Little Tokyo.