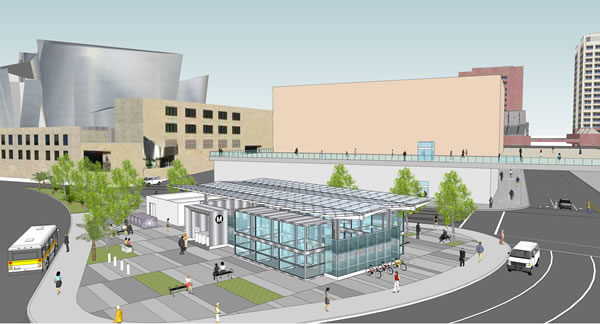 The new 2nd Pl/Hope St Station will sit west of The Broad museum (under construction), surrounded by nationally recognized performing arts centers and museums.  Besides these cultural assets, the area remains a job and a residential center for thousands of angelenos.  The area traditionally known as Bunker Hill, draws thousands of local visitors, as well as tourists from all over the world.

Bunker Hill has a rich history from its inception in 1867 and its revitalization, beginning in 1955, which populated Bunker Hill with modern plazas and buildings.  The resurgence of Bunker Hill in recent years grew from the construction of public venues, such as the Walt Disney Concert Hall and the Museum of Contemporary Art.

With the completion of the Regional Connector’s 2nd Pl/Hope St underground station , visitors can hop on the train and exit at the footsteps of these popular venues.