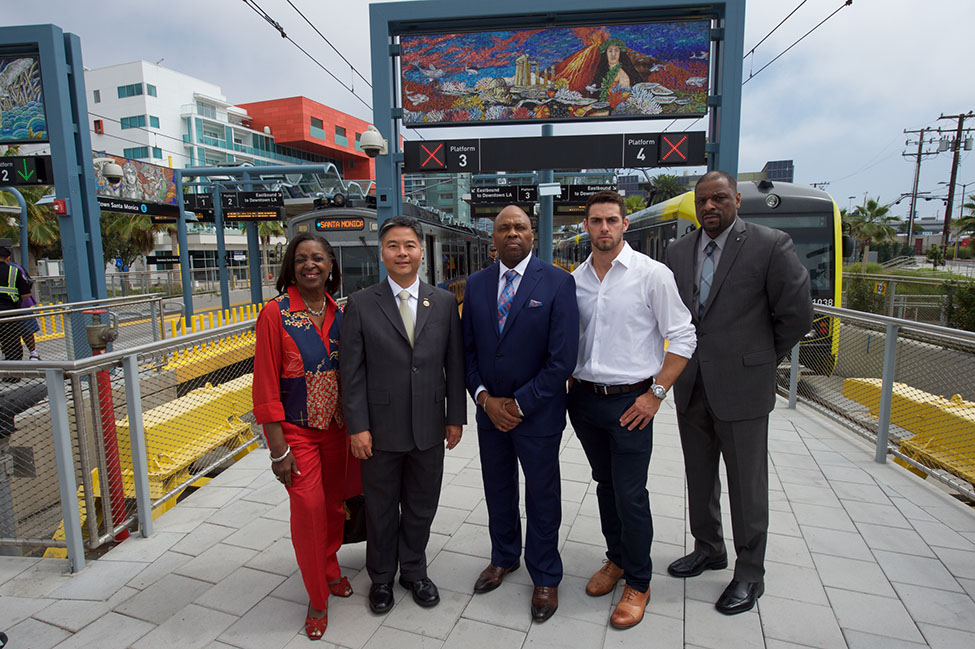 The project tour began at La Cienega/Jefferson Station where Phillip A. Washington, Metro CEO, and Brian Freund, Vice President of Operations at Skanska USA Civil, gave a presentation. Phase 2 of the Metro Expo Line project is 6.6 miles long and connects Santa Monica by rail to downtown Los Angeles and the rest of the 105-mile Metro Rail system that extends to the San Fernando Valley, the San Gabriel Valley, the South Bay, Long Beach and many points in between. Major construction began in 2012 and was completed in 2016. The Exposition Construction Authority awarded the design-build contract for Phase 2 to Skanska-Rados Joint Venture (SRJV) in March 2011 and the project opened May 20, 2016. The NRC presented SRJV with the 2016 Large Project of the Year for Expo 2 in January.

Expo 2 included the addition of seven stations — two aerial, four at grade, and one elevated. Systems and electrical work included a low-profile overhead catenary system (OCS), train control and signals, crossing protection, traction power and communications. The project's urban location required extensive planning to accommodate motor vehicles, transit riders, pedestrians and cyclists. Outreach efforts identified noise as a primary concern for residents and high profile theaters and recording studios near the tracks. As a result, a GERB system was installed to mitigate vibration and noise emitted by light rail vehicles. Expo 2 boasts two independent GERB systems, which were the first installed in the United States. Beyond the challenge of meeting community needs, Expo 2 also met numerous technical challenges to become the first transit project in the United States to receive Envision™ Platinum certification from the Institute for Sustainable Infrastructure.

Congressman Lieu focused his remarks on the need for continued investment in our nation’s rail transit systems. “It was a pleasure to see firsthand the completed Expo 2 line, which connects many diverse neighborhoods in California’s 33rd District from Santa Monica to downtown L.A.,” said Congressman Lieu. “The project demonstrates the value of supporting transportation infrastructure investments.”

“The Expo Line is now Metro’s second busiest light-rail line in terms of ridership and our agency’s first project to receive the Envision Platinum certification,” said Metro CEO Phillip A. Washington. “It continues our track record of building projects that are not only successful but showcase our commitment to sustainability.”

“We believe this project shows how a transit project can have benefits beyond mobility,” said Brian Freund, Vice President of Operations at Skanska USA Civil. “This project provided work for a significant number of local, traditionally under-utilized businesses and trade workers while also showing the benefit of design-build delivery for the tax-paying community. It’s a pleasure to share this success with Congressman Lieu.”

Congressman Lieu was elected to represent California’s 33rd Congressional District in the United States House of Representatives. In his first term, Ted was elected president of the Democratic Freshman class by his colleagues. In 2016, Congressman Lieu was reelected and currently serves on the House Judiciary Committee and the House Foreign Affairs Committee. He was also appointed as an Assistant Whip for the Democratic Caucus. www.lieu.house.gov