The Los Angeles County Metropolitan Transportation Authority (Metro) today announced the grand opening of a new Metro Bike Hub at Los Angeles Union Station, one of the largest secure-access bicycle parking facilities of its kind on the Metro transit system. 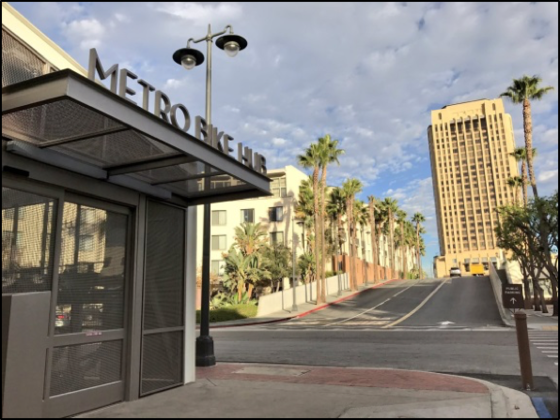 Located next to the north breezeway of Union Station West near Alameda Street, the $2.5 million, 3,000-square-foot facility can accommodate safe and secure parking for nearly 200 bicycles under a controlled entry system and closed-circuit TV surveillance. The facility will support an array of bicycle-related services, including onsite staff, same-day repairs, accessory sales and bike-related clinics and classes for multi-modal transit riders.

“Metro is committed to providing Angelenos with sustainable, healthy alternatives to driving -- whether they’re commuting to work, or taking a trip across the region,” said Los Angeles Mayor Eric Garcetti, Chair of the Metro Board. “This safe, secure bicycle parking center connects cyclists with one of our City’s most active transportation hubs and encourages more people to get where they’re going on two wheels.”

Two other Metro Bike Hubs are currently operating at El Monte Transit Center and Hollywood/Vine Metro Red Line Station. Metro’s growing network of Bike Hubs allows bicycle commuters to leave their bikes at stations in a safe environment and avoid the hassle that sometimes comes with bringing bikes aboard crowded trains or exceeding the two-or three-bicycle rack limit on buses. Hubs are also an effective way to encourage “first mile, last mile” connections to transit, which is a common barrier for many would-be transit commuters.

“We’ve recently brought a host of new services to Union Station, but this new bike hub promises to be one of the best yet for our multi-modal customers,” said Metro CEO Phillip A. Washington. “We now have a dedicated bike shop, parking area and common meeting place for our local bicycle community here at Union Station.”

Retail and bike services will be provided by the Bike Center. The company will host bike repair and commute information clinics for community members to learn more about commuting and traveling by bicycle. The bike center will also offer bike valet, tours and bike rentals at the site, and will explore other possible bike-related activities to encourage local bicycle trips. Retail hours will be Monday through Friday from 8 a.m. to 6 p.m. and Saturday and Sunday 10 a.m. to 6 p.m.

Parking at the Union Station Metro Bike Hub access will be available for registered users for $5 weekly, $12 monthly or $60 yearly. The low fee structure is designed to appeal to a wide range of customers, including occasional bicycle riders, seasonal riders, regular commuters and non-commuters. Only registered users can park in the facility, which is accessible 24/7 with surveillance cameras and intrusion detection technology to provide increased security. Users can register online at www.metro.net/bikehub. A California identification card/driver’s license or Metro Bike Hub card is used to enter the facility. Users are responsible for locking their bike and gear to the racks. As part of their membership benefit users will also have access to El Monte and Hollywood/Vine Bike Hubs.