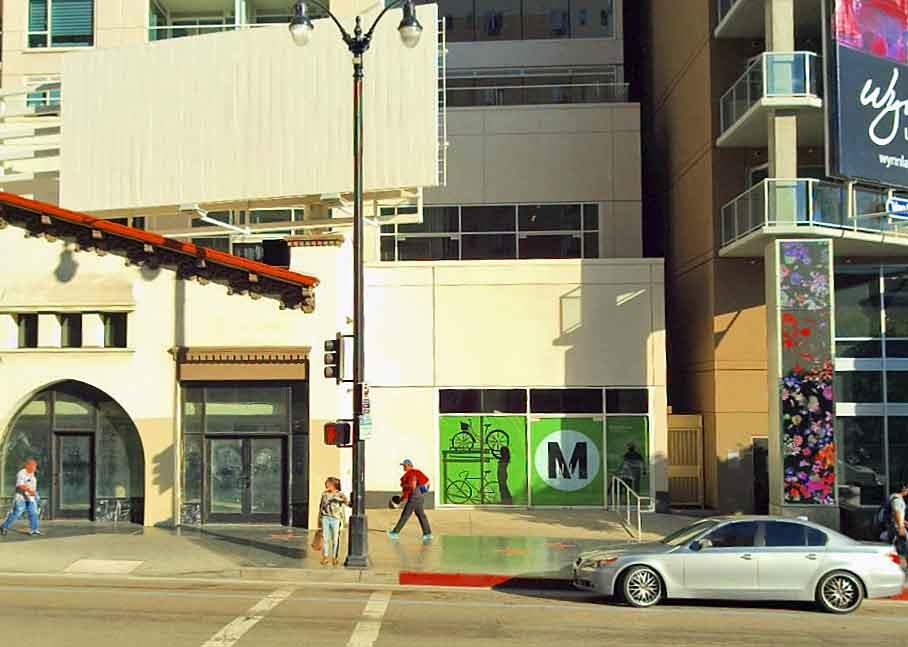 The $560,000, 1,000-square-foot facility is located at 1630 N. Vine Street and is conveniently located in prime ground-floor retail space just around the corner from the Hollywood/Vine subway station.

"Hollywood and Vine, one of L.A.'s premiere entertainment destinations known around the world, now has a safe, secure facility for everyone who wants to travel by bicycle to enjoy the Hollywood Walk of Fame, hotels, theatres, museums, nightlife and other major Hollywood venues," said John Fasana, Metro Board Chair and Mayor Pro-Tem of the city of Duarte. "What's more, this bike hub is the perfect solution for Hollywood area commuters who want to bike to and from Metro's subway station to complete their first and last mile connections. Either way, Metro's new bike hub will make it much easier to combine trips and avoid Hollywood Boulevard's traffic and parking challenges."

Bike hubs provide an attractive option for commuters who drive to Metro park-and-ride lots, especially for those who live within a bikeable distance of transit stations. The hub allows riders to leave their bikes at the station in a safe environment and avoid the hassle that sometimes comes with bringing bikes aboard crowded trains.

Space for the hub was made available by the W. Hotel as part of a development agreement with Metro. The hotel sits atop Metro's Hollywood/Vine subway station.

The Metro Bike Hub will be staffed Monday through Friday from 7 a.m. to 11 a.m. by BikeHub, Metro's contractor. The company will host free bike repair and bike commuting clinics. BikeHub is also working on partnerships with local tour operators to rent bikes at the site, and will explore other possible bike-related activities to encourage local bicycle trips. BikeHub is a partner with Metro's Bike Share vendor Bicycle Transit Systems, and will help customers purchase bike share memberships. Metro Bike Share is currently available in downtown Los Angeles and is coming soon to Venice, Port of Los Angeles and Pasadena.

"Bike hubs represent Metro's latest efforts to create a balanced transportation system in L.A. County and give people new ways to connect with the Metro system," said Phillip A. Washington, Metro CEO. "These new hubs will help solve our customers' most stubborn first mile/last mile transportation challenges. Commuters will increasingly have greater opportunities to combine bicycle and transit trips as we expand the network of Metro Bike Hubs throughout our region."

Similar to Metro's current bike locker program, parking at the Hollywood/Vine hub will be available for registered users who pay $5 weekly, $12 monthly or $60 yearly. The low fee structure is designed to appeal to a wide range of customers, including occasional bicycle riders, seasonal riders, regular commuters and non-commuters. Only registered users can park in the facility, which is accessible 24/7 with surveillance cameras and intrusion detection technology to provide increased security. Users can register online at www.metro.net/bikehub or at the hub itself. A driver's license or Metro Bike Hub card is used to enter the facility. Users are responsible for locking their bike and gear to the racks.

"Metro's Bike Hub is a welcome new addition to Hollywood and Vine," said L.A. City Councilmember Mitch O'Farrell, who represents the 13th Council District, including Hollywood. "If we want to reduce our reliance on motor vehicles, Los Angeles residents need better, reliable transit options. More people are riding bikes to get to work and for recreational purposes and the Metro Bike Hub is another step to building our bicycle infrastructure. I am excited to have this new world-class amenity in one of our city's most iconic destinations."

BikeHub utilizes cutting edge access-control technology that the company says will ensure unparalleled security and customer service. Its system employs a space-efficient design that provides full repair and retail services in a small space and cost-efficient staffing during the peak morning hours.

A similarly operated Metro Bike Hub is also planned for Culver City Expo Line Station in 2018. Additional hubs are in the works. On May 15, Metro celebrated the groundbreaking for a new the Metro Bike Hub at Union Station, which will offer nearly 200 secure bicycle parking spaces on the station's north breezeway on Alameda Street. That hub is expected to open this fall. Another bike hub is being planned at the North Hollywood Station, as well as future transit projects like the Willowbrook/Rosa Parks and Airport Metro Connector stations.  Collectively, all planned Metro Bike Hubs will create a network of innovative safe, secure bicycle parking facilities at key transit hubs around the Metro system.

The Hollywood-Vine Metro Bike Hub was funded through the Federal Transit Administration Grant for urban transportation planning.  The FTA's contribution for the hub was approximately $374,000.