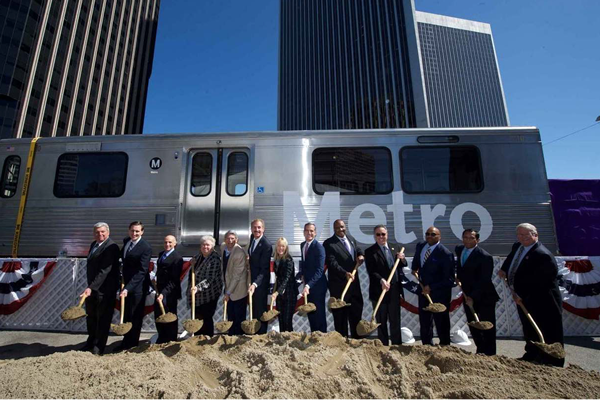 Metro has begun moving underground water, gas, power and telecommunications lines to make way for future subway construction. The agency is also conducting potholing, geotechnical tests, traffic surveys and other preparatory work. Major construction activities are slated to begin this spring when work crews create a launch area for a tunnel boring machine at the planned Century City/Constellation Station. Major work at the planned Wilshire/Rodeo Station in Beverly Hills is expected to begin at the end of this year or early 2019.

“Angelenos deserve a world-class transportation system that takes the burden off their commutes, connects people with our countless sights and attractions and makes Los Angeles a more accessible and sustainable City,” said L.A. Mayor Garcetti, who serves as Metro Board Chair. “Today’s groundbreaking is a clear indication that this project to link Downtown L.A. to our region’s second-largest job center is on time and on budget.”

Metro has already begun construction of the first four-mile section of subway between Wilshire/Western in Koreatown and Wilshire/La Cienega in Beverly Hills. This initial section is now 30 percent complete and is scheduled to open in 2023. Section 2 is scheduled for completion in 2025 and the third and final section from Century City to Westwood/VA Hospital is planned to open in 2026, two years prior to the 2028 Olympic and Paralympic Games.

“Los Angeles laid out a bold vision for its future, and today’s groundbreaking marks a significant step in making that a reality,” said U.S. Senator Dianne Feinstein. “As we begin construction on the second phase, I remain committed to working with our local leaders and the federal government to complete the Purple Line Extension on time. I’m confident that by 2028, Los Angeles will have a world-class subway system when we welcome the world to the Summer Olympics.”

The entire Purple Line Extension project is based on a three-phase construction schedule, which is expected to include $3.6 billion in federal grants. Metro has established a $2.53 billion budget for Section 2, including $1.5 billion from a federal grant and loan. County sales tax proceeds from 2008’s Measure R and 2016’s Measure M voter-approved transportation measures are providing critically needed local funding to match the federal contributions and accelerate construction work. “The new Purple Line extension is an exciting opportunity that will bring jobs to the district and increasingly efficient transportation alternatives to Los Angeles,” said U.S. Representative Karen Bass. “In addition, this crucial overall investment in transportation infrastructure will bring billions of dollars into the Los Angeles economy. I’m looking forward to our community experiencing the benefits of the completed plans. Los Angeles residents have repeatedly voiced their strong support for transportation funding at the ballot box and I’m proud to help make that a reality. I look forward to riding the completed line.”

A contractor to build Section 2 has already been selected. Metro has awarded a $1.37-billion construction contract to Tutor Perini O&G, a Joint Venture, to build the second subway section.

“We now have the funding and the contractor in place to build Section 2 of this massive transit project that will greatly improve mobility for the whole L.A. region,” said Metro CEO Phillip A. Washington. “This project, along with the buildout of the final section, Purple Line Section 3, and coupled with our three additional transit lines now under construction, will create new transportation choices for our customers and move us closer to our goal of becoming the best transit system in America.”

According to the Los Angeles County Economic Development Corporation, the Purple Line Section 2 project will create over 20,500 jobs in Southern California.

The Purple Line Extension is projected to generate about 49,300 daily weekday boardings at its seven new stations. There will be about 78,000 new daily trips on the full Metro Rail System as a result of opening the line. Trains are expected to run every four minutes during peak periods and every 10 minutes during off-peak times. It is projected to take about 25 minutes to travel between downtown Los Angeles and Westwood on the subway.

Other major destinations accessible via the Metro Purple Line will include the Los Angeles County Museum of Art, Peterson Auto Museum, the Miracle Mile District, UCLA, and Westwood/VA Hospital.