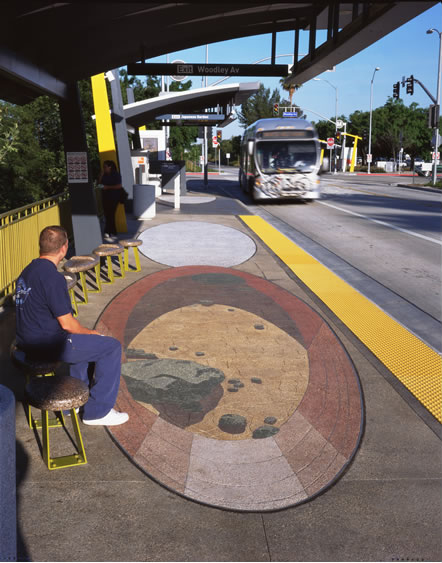 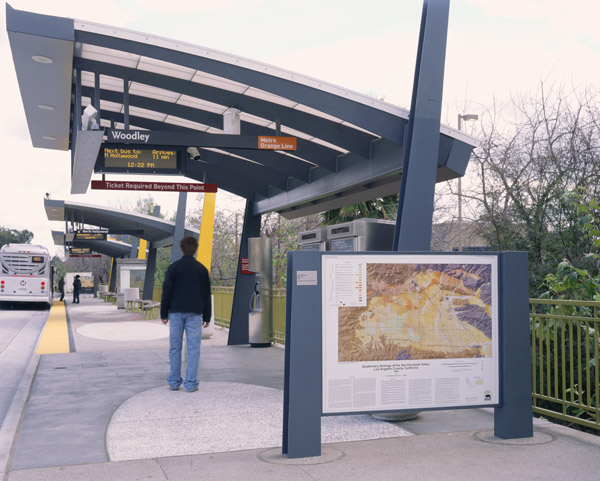 John Roloff designed terrazzo paving areas and porcelain enamel steel panels for station platforms. Roloff’s artwork references the geological make up of the Van Nuys, Sepulveda and San Fernando Valley area as well as paying homage to the geologists who study the Valley. A gradient of light creates the illusion of a cavity with mud cracks indicating water from ancient aquifers, while boulders reveal remnants of an imaginary, ancient event dispersing the rocks now held in place by subsequent deposition. West oriented shadows represent a moment in time, in the late afternoon of one day, perhaps hundreds of thousands of years ago buried by geologic processes now revealed by the cavities excavation. The illusion of depth is an invitation to look beneath the Valley’s surface both literally and imaginatively.

“My work is an examination of psychological and conceptual relationships between humanity and nature, materiality and process, often evoking a poetic interplay between primal and scientific conditions. This exploration was inspired in the work of 1970’s through the early 1990’s by qualities of the sublime evoked by the geology and natural dynamics of the North American landscape. Since the mid-1990’s other, related issues, particularly structural and systemic relationships between landscape architecture and technology, have increasingly characterized the work.”

JOHN ROLOFF is from Oakland, CA. Roloff is a visual artist with a background in science who works conceptually with site, process and natural systems and whose projects often take the form of large-scale environmental and gallery installations.  His work has been seen both outdoors and in exhibitions at the Whitney Museum of American Art, New York; UC Berkeley Museum, Berkeley; San Francisco Museum of Modern Art, San Francisco; Smithsonian Institution, Washington DC; Photoscene Cologne, Germany; and the Venice Architectural and Art Biennales, Italy; and The Snow Show, Kemi, Finland.  A recipient of 3 visual arts fellowships from the National Endowment for the Arts,a Guggenheim Foundation fellowship and a California Arts Council grant for visual artists, Roloff is a professor, Chair of Sculpture and co-coordinator for the Center for Art and Science at the San Francisco Art Institute.