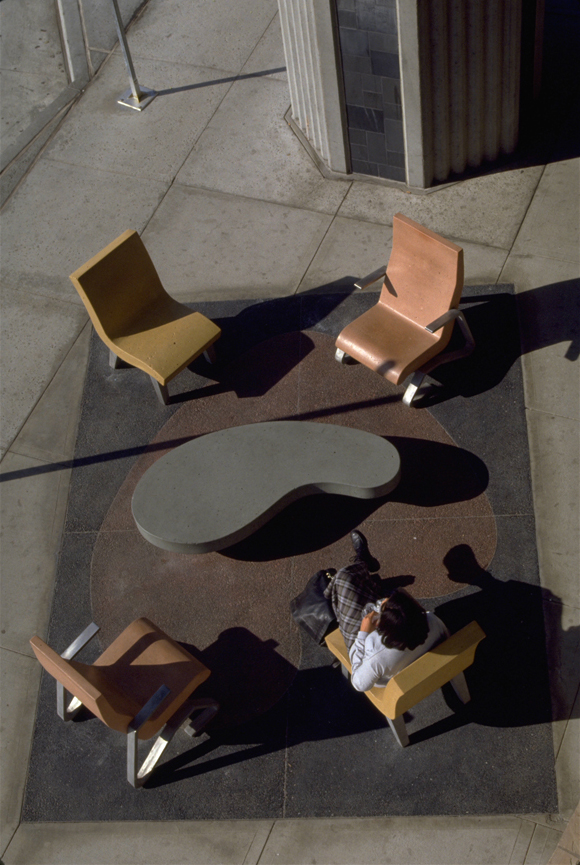 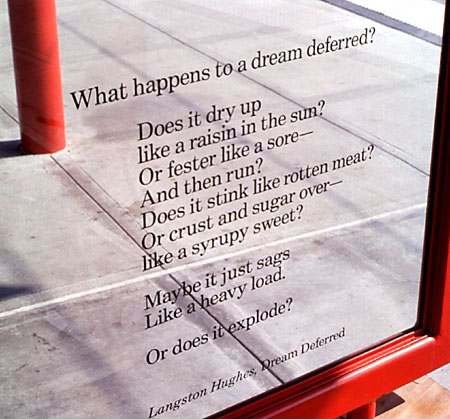 Working with the station architect and engineers, artist Richard Turner celebrates the exuberance of mid-century modern American design and the expansive optimism of the 1950's aerospace industry. References to the landscaping and furniture of the middle-class American home are combined with elements of Los Angeles vernacular architecture to create a station that is a synthesis of the home and the workplace.

Flagstone paving, suburban landscaping and furniture casually arranged in conversational groupings bring the comfortable ambiance of the middle-class home to a potentially impersonal public space. The colored concrete chairs and coffee tables are arranged on terrazzo "rugs" and invite passengers to sit down and feel at home. Streamlined boomerangs, palettes and kidney-bean shaped wall sculptures recall the vocabulary of 1950's modernist sculpture. Overhead, the cantilevered roof of brushed aluminum barrel vaults and decorative struts at once suggest both aircraft structure and California's renowned carwash architecture. Silhouettes of classic modern furniture float down the elevator glass, and pay tribute to innovations of mid-20th-century design.

Waiting for their trains, passengers are shielded from the wind by glass screens printed with quotations from Beat Generation writers Jack Kerouac and William Burroughs, as well as by African American writers Ralph Ellison and Langston Hughes, reminding commuters that the prosperity and optimism of the 1950s were not shared by all.

"My intent is that the design serve as a transition between the home and the workplace and as a 'hail and farewell' to the passenger on his/her way to LAX. Leaving the state or leaving the country, returning from abroad or coming here for the first time, the traveler will be reminded of a classic epoch of modern American culture."

RICHARD TURNER was born in Kansas City, Missouri and raised in rural Michigan, and spent his last two years of high school in Saigon, Vietnam. Between undergraduate work at Antioch College and graduate study at the University of Michigan, he spent a year in India on a Fulbright scholarship. Turner lives in Orange, California, and is a professor of studio art and art history and is the Director of Chapman University's Guggenheim Gallery. His public commissions include Market Square Park in Houston, Texas; Westside Light Rail in Portland, Oregon; Newton Police Station in Los Angeles; and two wastewater treatment plants in San Diego, California.