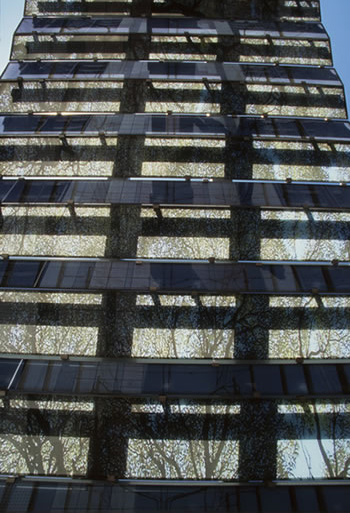 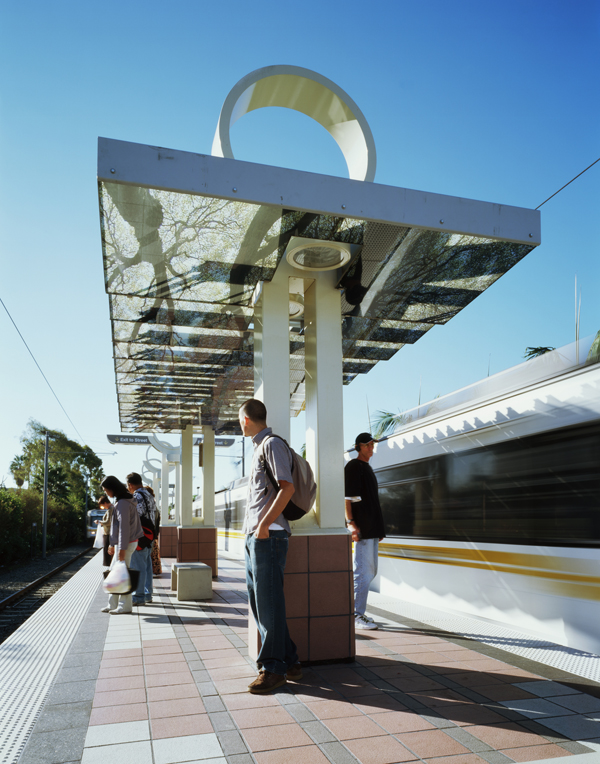 Out of Sight consists of a stunning glass canopy and concrete benches. The translucent glass panels are slanted to depict a photo image of a willow tree in the south direction, and a photo image of the web of catenary wires that power the rail system as seen from the north direction.

The double-faced artwork conjures analogies between nature, the natural canopy of willows, and the man-made, urban canopy of catenary wires. Two concrete benches with poetic text alluding to the experience of travel and the history of the site were installed under and near the canopy.

Merge was also inspired by the experiences of looking out a train window while in transport, watching the passing landscape and observing an object from far away, seeing it get closer, then for a moment seeing a frontal image before it finally disappears out of sight. Through the special structure of the canopy only one fragmented photo image can be seen from either platform direction. There is one point when one image becomes perfectly perceivable. Beyond this point the second photo image comes into view. Underneath the canopy, both images are equally in view although stretched and distorted.

“We were interested in an artwork with a strong conceptual component as well as a functional application. Waiting for transportation is a universal state of mind. Our work plays with illusion, light and poetry. The artwork narration is not necessarily literal but is tied to this specific site.”

MERGE CONCEPTUAL DESIGN is Franka Diehnelt and Claudia Reisenberger. The Santa Monica based artists have collaborated on design projects for the past ten years in Europe and the United States. Both were formally trained in Vienna, Berlin and Copenhagen in architecture as well as art. The artists have completed public art projects throughout the Los Angeles area, including the entrance canopies for the “Prado on Lake” development, Pasadena. The artists also completed public art projects for two Metro El Monte busway stations.