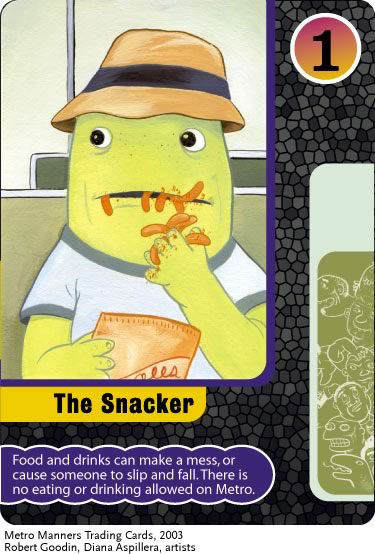 Metro Manners Trading Cards are a series of collectibles that depict public transportation etiquette in a variety of whimsical scenes. Original cartoon characters, designed by Meat Collective, colorfully promote a pleasant bus and rail environment. The trading cards are solely distributed through Metro’s Safety Program, which gives presentations to schools in LA County. Characters include: the Blab Sisters, who talk to loudly on the train or bus; the Snacker, whose food and drinks make a mess; and Edgy Eddie, who creates a hazard by standing too close to the edges of sidewalk curbs and train platforms.

There are fourteen trading cards distributed in foil wrappers of five cards. Each card has a numerical value (1 through 9). These values correspond to a game where two or more players could flash a card and the highest value wins with the exception of "1" which beats a "9" and a "2" which beats an "8".

"A world where aliens, stuffed animals, and all sorts of other creatures co-exist and drive each other crazy is one way reality can be perceived - or maybe it really is that way to illustrator, Robert Goodin. In collaboration with Metro's Metro Art, Meat Collective used the cards as a way to catch the attention of school kids and gently educate them on proper public transportation manners." - Diana Aspilera

MEAT COLLECTIVE -  DIANA ASPILLERA is a well versed graphic designer whose clients include Animax Interactive, Disney and Warner Brothers. Diana founded Meat Collective in 2001 as a means of bringing graphic artists, illustrators and fine artists into a pro-active team environment.

MEAT COLLECTIVE - ROBERT GOODIN grew up in California and started working in the animation industry fresh out of high school. He founded Robot Publishing, a collective of eight artists and published the anthology 'Oden' in 1998. In 2002, Robert Goodin devoted himself full time to comics, co-editing the anthology 'Top Shelf Asks The Big Questions' and contributing comics to Kitchen Sink Magazine.