Journeys: LA Communities Through the Eyes of Artists 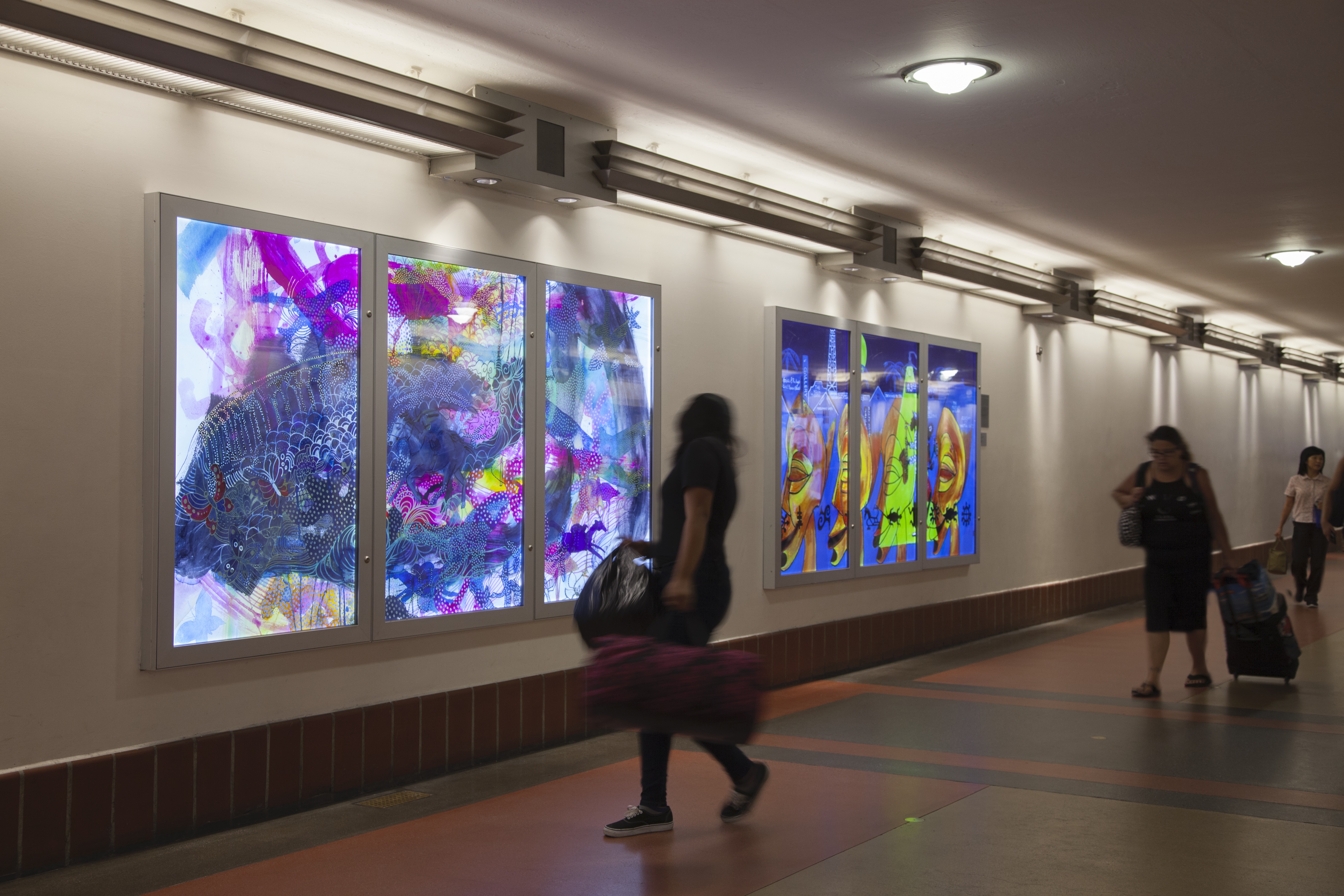 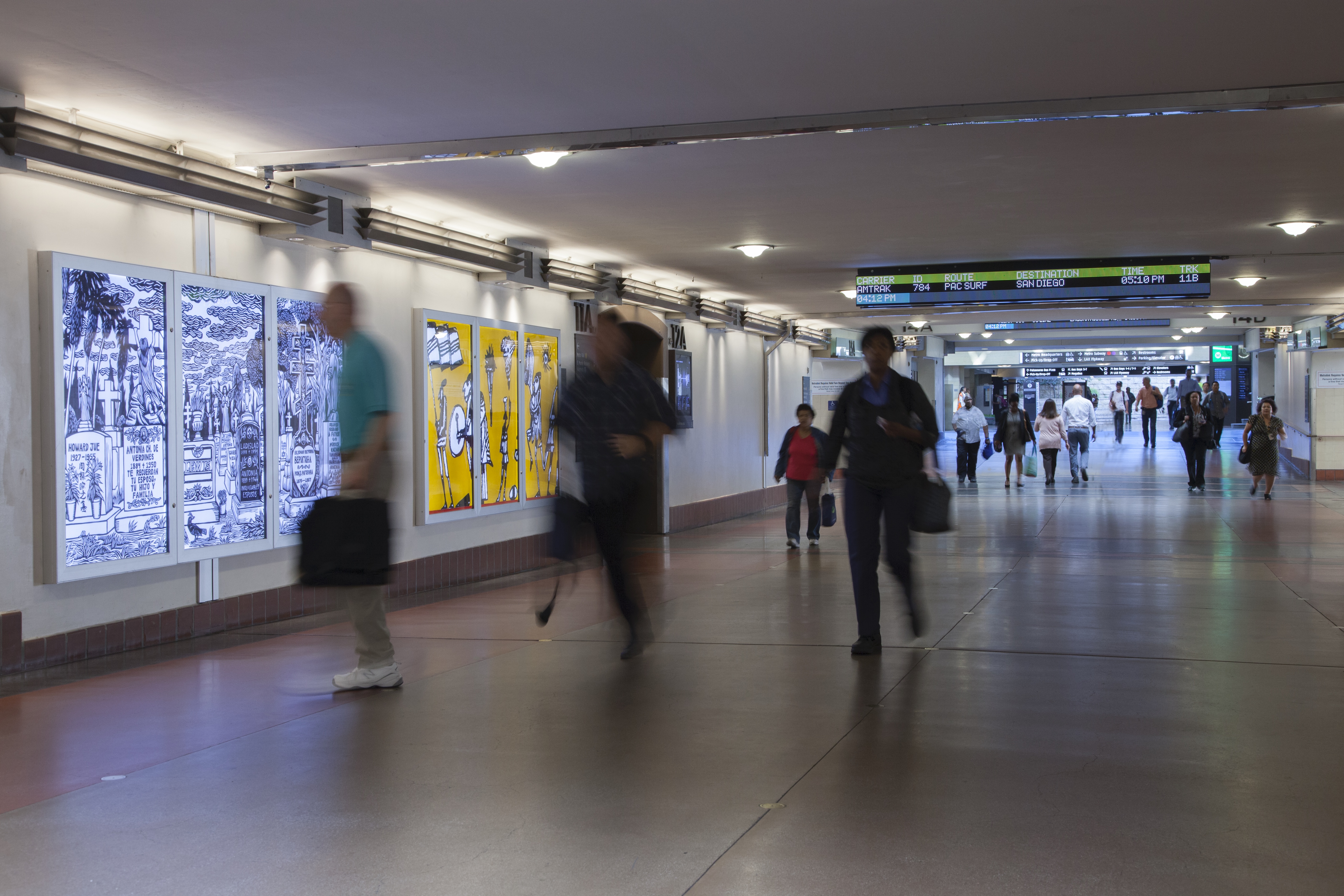 Each artwork on display in this passageway focuses on a particular neighborhood or city within Los Angeles County “through the eyes of artists.” The artists capture the look and feel of each place from a personal perspective, highlighting special, surprising, unexpected or lesser-known facets of those communities. Lush urban gardens, backyard barbecues, street parades, cemeteries and even a fantastical underwater world are among the subjects for these idiosyncratic works of art.

Following in the tradition of colorful travel destination posters, the artworks are part of a series—typically presented on posters inside buses and trains—that encourages riders to explore communities throughout the expanding Metro transit system.

WALTER ASKIN studied art at the University of California Berkeley and at the Ruskin School of Fine Art, Oxford University, England. He has exhibited throughout the world, including solo-exhibitions at Künstlerhaus, Vienna; the Whitney Museum, New York; and the De Young Museum, San Francisco. He taught for many years at the University of California, Los Angeles where he received the Outstanding Professor Award. The artist's artwork is included in the collections of the Tate Gallery, London; the Institute of Contemporary Art, Chicago; and the National Gallery of Art, Washington DC.

SARAJO FRIEDEN is an artist and illustrator who has exhibited in galleries throughout Los Angeles. Her artwork appears regularly in national and international magazines, children’s books, CD covers and greeting cards.

JANE GILLESPIE PRYOR is a visual artist working primarily in sculpture and photography. She has exhibited her work regionally and has been awarded the Maguire Teaching Fellowship and the Joe Sonneman Photography Prize. Gillespie Pryor received her BA from the University of Southern California and her MFA from Claremont Graduate University. She is originally from Wichita, Kansas. 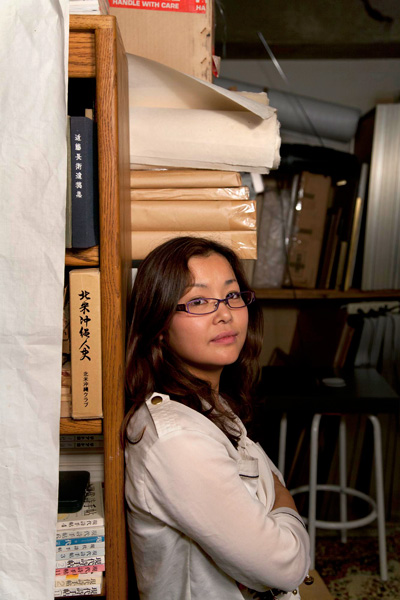 WAKANA KIMURA (b. Shizuoka, Japan) received her Bachelor of Fine Arts from Tokyo University of the Arts (Tokyo Geijutsu Daigaku) and a Master of Fine Arts from Otis College of Art and Design. She has exhibited her works at institutions such as the Tokyo Metropolitan Art Museum and Gallery NEXUS in Kanagawa, Japan. She is the recipient of the Grand Prix at the Creators Audition of Digital Hollywood University.

CHRISTINE NGUYEN received a Bachelor of Fine Arts from California State University, Long Beach and a Master of Fine Arts from the University of California, Irvine. Solo exhibitions of her work have been featured at the Hammer Museum, Michael Kohn Gallery, Andrewshire Gallery and Sam Lee Gallery in Los Angeles, and 10 Chancery Lane Gallery in Hong Kong. Her work has also been included in group exhibitions at the Laguna Beach Art Museum, 4-F Gallery, Churner and Churner in New York, San Art in Vietnam, Kunsthalle zu Kiel and Sprüth Magers Projeckte in Germany and Dancing Elephants Project in Bogotá, Colombia.

MARY ANN OHMIT received a Bachelor of Arts from St. Cloud University in Minnesota. She taught art at Azusa High School for many years. Her work is exhibited in several galleries in California and Minnesota.

SAM PACE is an artist, graphic designer and illustrator. He has exhibited in many galleries and community centers throughout Los Angeles including the Watts Towers Arts Center. His commissions include poster illustrations for events such as the Vancouver Wine and Jazz Festival and the Playboy Jazz Festival.

AARON RIVERA has a diverse artistic background including storyboard artist, scenic painter, and puppet fabricator. He has exhibited work at various galleries in Los Angeles at such places as the LA Municipal Art Gallery and La Luz De Jesus Art Gallery. He has also presented his work at Art Basel in Miami, Florida and the UBC Mural Company in Chicago, Illinois. Rivera received a Bachelor of Arts degree from the San Francisco State University. 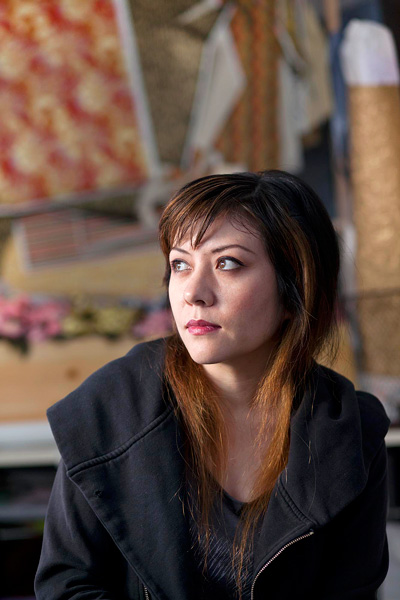 EDITH WADDELL has exhibited her artwork locally at such institutions as La Luz de Jesus Gallery and Hive Gallery. She has experience as a painter, illustrator and printmaker. Waddell self-published a children’s book titled “The Freaky Circus Book” and has exhibited at local art galleries including Hive Gallery, La Luz de Jesus and Da Vinci. She is the recipient of the Buchalter Memorial Scholarship and Gay Johnson Award. Waddell received a Bachelor of Fine Arts from Otis College of Art and Design.