For Your Intellectual Entertainment 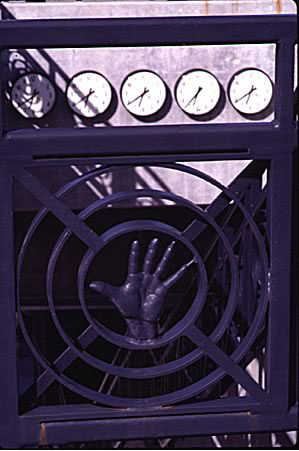 Defense and aerospace are two of the industries in the immediate area around the El Segundo/Nash Station and artist Daniel Martinez attempts to add some lighthearted humor to this serious environment. In For Your Intellectual Entertainment a thirty foot wire-mesh hand is poised to launch, with the help of a slingshot, a giant "paper" airplane off one end of the platform.

Working with the station architect and engineers, Martinez designed several elements of the station including the canopy which mimics the industrial sawtooth designs commonly used in the aerospace and defense industries. The stairwalls echo nearby red and white striped smokestacks which are a landmark in the area. Terrazzo paving patterns allude to the importance of the area's oil industry through shapes derived from both ancient amphoras and squid.

Walking up the station's stairs, passengers will discover words and phrases which have entered our 1990's vocabulary; will they remain in our lexicon or become obsolete? A series of clocks is also part of the design. Station seating, handrail patterns and other elements were also designed by the artist.

"As artists, we try to weave our ideas into the design of each station so that we create a whole piece, something like a fabric, when it's finished. Freeways in Los Angeles have retaining walls which render the communities they run through invisible. This portion of the Metro Green Line is above ground and doesn't have retaining walls—making it possible for riders to consider the view and to see into neighborhoods. With eventual increase in ridership, the Metro Rail system will begin the process of breaking down the barriers that have always existed between LA communities and I'm very excited to be a part of it."

DANIEL J. MARTINEZ grew up in Los Angeles and received his Bachelor of Fine Arts from CalArts. A multimedia artist whose work crosses disciplines and mixes technologies, he turns intangible emotions into revealing artworks. Known for his powerful and often disquieting work, Martinez was named by Newsweek magazine as American art's hot "new face" for 1994. His public art commissions include a project in Anaheim, and a collaborative project in downtown Philadelphia. He has completed a number of temporary public art projects throughout the country.