I Dreamed I Could Fly 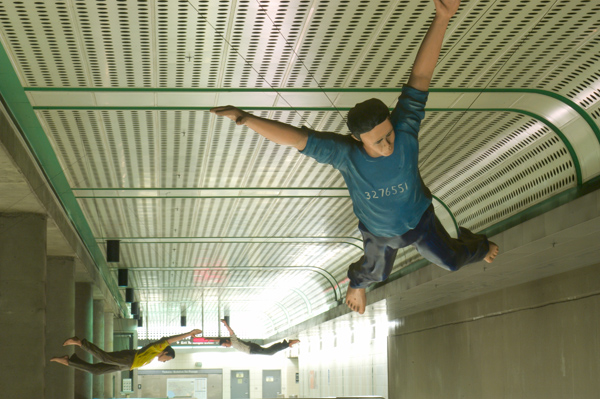 In a reflection of the universal motif of flight as spiritual journey, Jonathan Borofsky’s I Dreamed I Could Fly is an interpretation of the artist’s dreams of soaring above ground. The six fiberglass figures, all resembling the artist, hover and cast large shadows in the high bay area of Civic Center Station. The work has an audio element as well—the figures are accompanied by an occasional trill of a bird. The numbers on the sculptures are a particular characteristic of Borofsky's work: the artist consecutively numbers all of his work—from working notes and sketches to finished artworks.

"I've had quite a few flying dreams in my lifetime. Many other people I've spoken to have had similar dreams. Sometimes I fly above it all, serene and rather enlightened...other times my flying dreams seem more like an escape from earthly concerns."

JONATHAN BOROFSKY grew up in Boston and was educated at Carnegie-Mellon, Yale, and the Ecole de Fountainbleau in France. Borofsky’s work has been exhibited at galleries and museums around the world. In 1984, a retrospective of his work toured major museums throughout the country. Borofsky’s sculptures can be found in many locations in Los Angeles from “Molecule Men” which holds a prominent location in front of the Roybal Federal Building, to the “Ballerina Clown” on Main Street in Venice, to the large activated “Hammering Man” in the plaza of the California Mart at Spring and Olympic Streets. These sculptures, as is true of most of Borofsky’s other works, are recognizable forms—humans, clowns, animals—used in a playful manner and unusual context, provoking diverse interpretation.