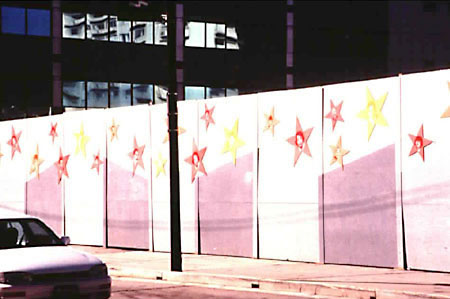 Artist Phyllis Green completed a two-phase construction fence project for the Hollywood/Highland construction site. The first phase, inspired by Hollywood's historic movie industry and the merging of reality and fantasy that is part of the spirit of American film, used fantasy film posters resembling industry "one sheets" (advertisement posters) to cover the construction fence on Hollywood Boulevard between Orchid Avenue and Highland. Instead of promoting current releases, Green's posters featured actual residents of the Hollywood area. Each poster included a photographic image of the subject combined with lines of text conceived by that subject, referring to a fantasy about his/her future life. The posters were hung in groupings to produce the effect of contemporary urban tiles. Large graphic text highlighting famous lines from actual movies were incorporated to break up the poster patterns and be highly visible to passing traffic.

The second phase of the project replaced the fantasy film posters with multiple editions of painted plywood stars depicting screened portraits of both entertainment industry personalities whose Hollywood Walk of Fame stars had been temporarily removed during construction, and local community "stars" involved with contemporary Hollywood.

"My project literally puts people back on the block."