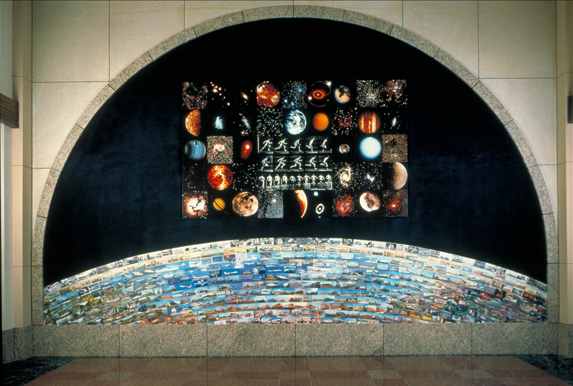 Patrick Nagatani's collage mural addresses the idea of transportation from an individual to a global perspective. Over 500 postcards of transit images from 1900-1995 together form a view of the edge of the earth seen from space. Images from NASA, including photos taken from Voyager I, the Hubbell Space Telescope, the Magellan Probe, Viking I, Voyager II, and the Galileo Probe are set against a black "deep space" background.

In the center are a series of images from photography and motion pioneer Eadweard Muybridge's eleven volume photographic study of motion, published in 1887. The series used in the mural is entitled Human Locomotion and is directly related to the mural's theme of transportation. This revolutionary study of the human anatomy in motion forever changed the way artists represent human movement; the series is also considered to be the first moving picture ever made.

The work reminds us that transportation begins and ends with each individual.

"From the dawn of mankind, the center of transportation has been with man himself. Whether walking, encased in transport systems, or 'beamed' to distant places, it is the mind and body of man that imagines, invents, and travels. This work is grounded in the earthly modes of transportation and hopefully lifted in spirit to those modes of transportation to come. This project is an homage to human ingenuity (the source), rather than a celebration of technology (its product)." 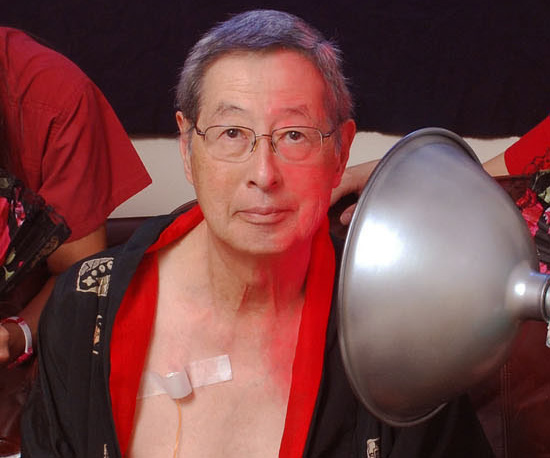 PATRICK NAGATANI was born in Chicago, Illinois, and received a Bachelor of Arts degree from Cal State LA, and a Master of Fine Arts from UCLA. In his photographs he collages images snipped from different moments in time and space dealing with issues that range from the Japanese-American experience to nuclear proliferation. Nagatani taught at Loyola Marymount University, the Art Institute of Chicago and the University of New Mexico. He has shown in countless solo and group shows in the U.S. and abroad and has received two NEA fellowships.