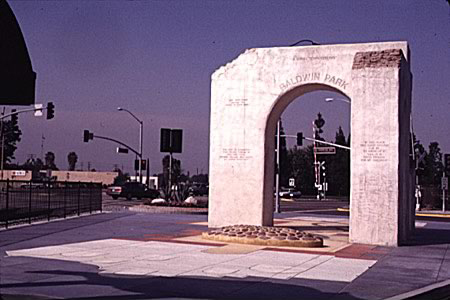 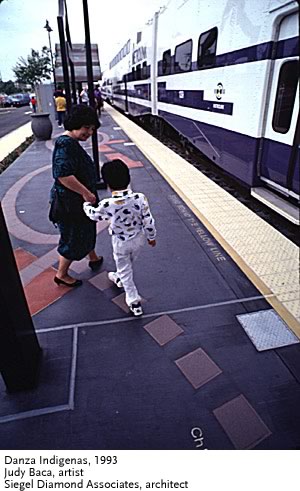 Entitled Danza Indegenas (Indigenous Dance) this artist/architect team design traces the historical importance of the California Mission period to contemporary Baldwin Park. Reflected in the platform paving are the floor plans of the four missions that are closest to the station site; superimposed on the floor plans are the steps of indigenous dances.

Voices from the past and present appear in five languages: Spanish, English, Gabrielino, Chumash and Luiseno. Included are the words "memory and willpower” which served indigenous peoples through the difficult times of disease and forced labor. "When the Indians died, the villages ended" is a quote from one of the last fluent native speaking Gabrielinos and it appears near the final dance step.

Also inlaid into the platform are the numbers of cattle and grape vines raised at the missions juxtaposed with the numbers of baptisms and deaths of indigenous people at the missions. At one end of the platform located on the San Gabriel Mission floorplan near what would have been the church altar is a low rock prayer mound. This mound stands in tribute of Toypurina who, at age 23, lead a revolt against the San Gabriel Mission on October 25, 1785.

There are two large pots on the platform—one houses an oak the other a cactus—each representing the two cultures, Gabrielino and Mexican, which came together to form the mestizo culture which is now Baldwin Park's dominant population. The California missions played an important role in the blending of these two cultures.

Appearing as the only remaining standing structure is a large fabricated arch (installed atop the San Gabriel Mission floor plan). The indigenous name for the area, “Sunigna" appears on one side of the arch along with Gabrielino pictograms; today’s name for the area, “Baldwin Park,” appears on the opposite side along with statements from contemporary inhabitants on their perceptions of their city and its future.

"I wanted to put memory into a piece of the land once owned by the American Indian cultures—memory and willpower are what any culture, the ones living then and those living now, has to have to preserve itself."

SIEGEL DIAMOND ARCHITECTURE has completed projects including the Air Traffic Control Tower for LA International Airport and the Hollywood/Highland Metro Rail Station. Kate Diamond is a past president of the Los Angeles Chapter of the American Institute for Architecture and served as lead designer on this project.

JUDITH F. BACA is best known for her large scale murals. Her art involves extensive community organizing and participation. It is through the collective experience that she receives inspiration for her imagery. Baca teaches at University of California, Los Angeles and is the Director of the Social and Public Art Resource Center.